3 nights with Voyager and New Equipment

After months of waiting for new mount (Astro-Physics Mach 2) and camera (QHY268C OSC), and most importantly, clear skies here in Seattle, we’ve had a good run of pretty good nights this week and I went after some galaxy targets (pretty much all I can get from my telescope location)! I set up a simple script in Voyager to connect and wait for a target to clear the trees and image until the target disappears behind my roofline, then gracefully shut down.

I used the Web Dashboard to frame the object and send the coordinates to RoboClip, which I then used in my sequence. The sequence handled plate solves, guiding (PHD2), and focusing, cooling etc. I used local field focusing for the first time in one case as the targets spanned the field. I also used Voyager to manage the meridian flip, in this case the flip is initiated from outside (Astro-Physics Command Center) as I need to do an early flip.

Bottom line: everything has gone pretty much perfectly for three nights now. Pointing, focusing in both ways, and guiding without a hiccup. I stayed up to watch the meridian flips and Voyager quickly detected the flip and ran the recovery perfectly to center, calibrate guider and resume imaging very efficiently. Lost guide stars were no problem, Voyager detected and recovered. Last night when I misestimated how far I could go before the roof intervened, Voyager calmly detected the lost guide star, attempted recoveries, and then shut down gracefully. I feel very comfortable sleeping during the imaging now! Although I’m sure I’ll continue to wake up and just check on things, I did have a couple issues with Non-Voyager things - camera locked up on download a couple times and for some reason the Sky X Pro (which I only use as a planetarium at this point) just quit a couple times.

The first two nights were on the Leo Triplet. These were taken in Bortle 6-7 skies over Seattle light dome, using a IDAS LPS-D2 light pollution filter. I’m attaching the image. 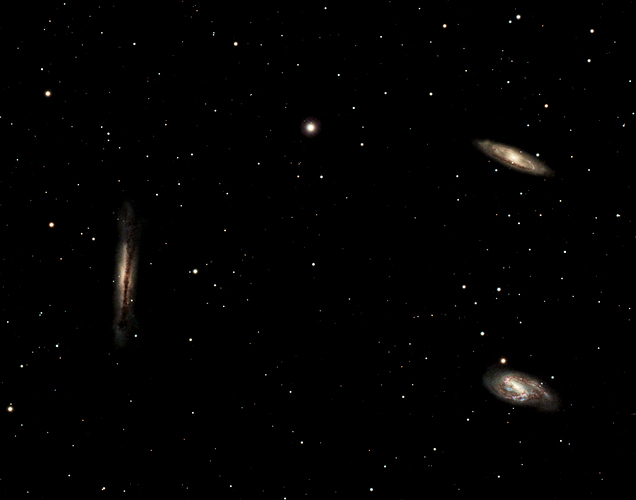 Thanks for your report Wayne, happy for your time doing AP , really a precious thing.
Really nice image with nice details and color, thanks for sharing.

Great write-up Wayne and congratulations on the Mach 2! I have an 1100GTO and a 900GTO and they are works of art.
Voyager is as reliable as the AP mounts!