Mosaic (my first!) composed of two panels along RA. Taken during nautical twilight as it does not get truly dark in England until late July now. L taken with Moravian G4 - 152mm refractor at 1300mm - and RGB with ASI2600 - 92mm refractor at 490mm.
Great field to ponder about the distance of objects along our line of sight: Barnard 150, the Seahorse Nebula is at roughly 1200ly; the cluster NGC6939 at 3860ly and NGC6946, the fireworks galaxy, at 22.5 million ly…

All made possible by Voyager despite the short nights (<3hrs). Working on a 9 panel mosaic in Cygnus now 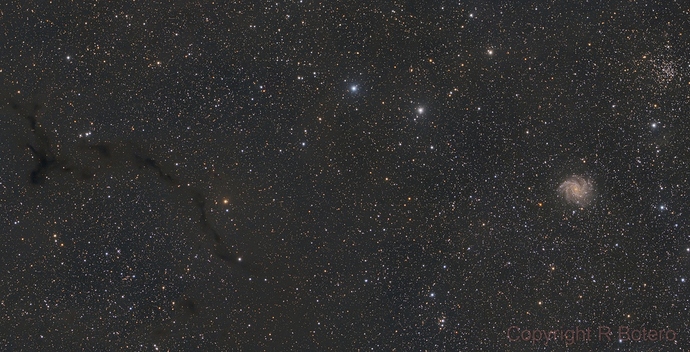 WOW… This is going to be amazing when its finished.

I’m also struggling with the short nights… And work in the morning.

LOL the image is finished…I’m not planning to add any more time to it. Now I wonder how it would have looked when finished

Thank you Francesco. None of this is possible without the Web Dashboard!

It’s the best tool out there to frame objects. That leaving aside the full control of Voyager from a mobile device.

Nice! This is kind of imaging nirvana mosaic using an array of telescopes!

Absolutely lovely Roberto what a great image and great framing to get it all in. I totally agree with you on the web dashboard, it’s a real gem.

Robert
PS. I’m sure your sky is darker than mine