Suggestion : Ephemeris and other things

It would be great if the targets emphemeris graphs were visible upon connexion to the planetarium software. TheSkyX already know coordinates where the mount is.

Finalement maybe it’s a small bug but the Status of the current target change to idle instead of Running if the number of times is changed in the Slot repeat target properties.

Finally I would had a column for the transit time of the target and allow the user to easily reorder targets with this propertie.

Bij the dry run, I have no idea what will first and or executed at X time

Ephemeris of Scheduler is not a normal ephemeris but are only available after scheduling process running, a lot of calculations is needed. So is not possible to show before. You must at least running one time the scheduler.

The order of scheduled cannot be changed because depends on scheduler chosen (in this case there is only Default at now). What you see is the list of last scheduled target like for the sceduled process.

What is the final real reason for a simulator in an automatic scheduler ?

I understand that the ephemeris graph is more than a usual ephemeris graph. It’s the scheduler at work.
I also understand that the blue area of the graph is the time when the target is scheduled and that part is calculated at runtime by the scheduler. But all other elements of the graph are geometrics representation of the constraints. So having this graphical representation (without the blue area) when we select contraints is the best feedback we can have to understand the the impact of constraints.

As I reply in another post, my horizon is restrained (between 45 and 58 degrees) and complex and I have to adjust constraints for every target.

If not in the RoboTarget page, a large version of this dynamic ephemeris graph could be available in the Target page like this image. 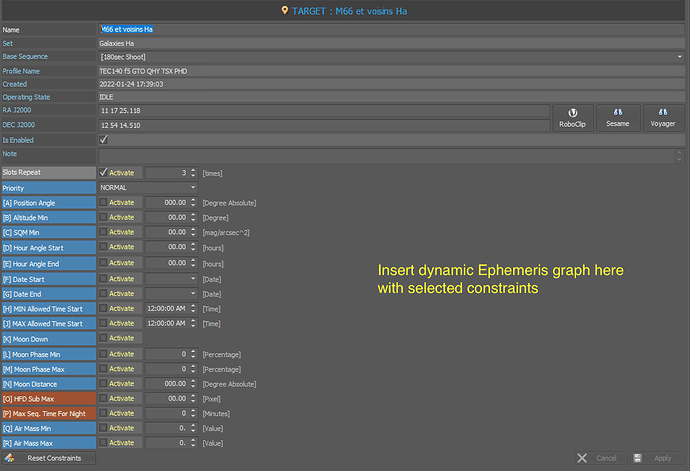 This is a client, cannot create an ephemeris Also you must only decide constraints here. Scheduler will do the job for you. Also because ephrmeris is based on a single night

thanks for the answer

I tought about it and if you implement a local horizon in the constraints, that would basically eliminate the need for the ephemeris graph.