An idea for inspecting spacing/tilt issues

I’ve been working on my Astroimaging Planner for a while now, but have detoured a bit into automatic image grading. While working on that, I have some functions that will extract the properties of each star in a subframe. These include FWHM, eccentricity, ellipsoid angle, local sky background, SNR, and other moment properties of the star shape. I’m interested in using that data to uncover more insights about my imaging systems. I’ve already found a lot of interesting effects with the almost 5k subs that I’ve stored over the years.

For my imaging rigs, I feel like some of them could be optimized, but it’s all very ad-hoc. Tonight, I shared on CN an analysis frame of one of the Takahashi Epsilon 160EDs raw subs that was shared there (impressive scope!). This analysis uses some of the tools I’m writing. It bins stars into a resampled grid on the chip to determine bulk FWHM/eccentricity stats, etc. Here’s the view of that plot showing what appears to be tilt. The red bars indicate the direction of the ellipticity, and the length is proportional to the ellipticity. The size of the dot at each grid site is proportional to the aggregated FWHM for that bin. 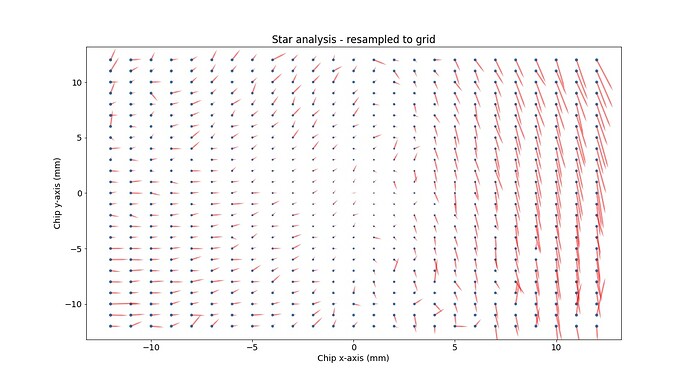 That got me thinking about some of the methods to determine the best spacing between a flattener and the chip. One is to inspect the radial/azimuthal direction of the ellipticity when the spacing is too short/long. Another that I heard recommended by Roland Christen is to focus on a star in the middle, then focus on a star at the edge of the frame. The relative difference between focus position indicates whether you need to increase/decrease the chip-flattener spacing.

So, naturally, I want to automate this and thought that Voyager’s Dragscript would be the perfect partner for it. It’s incredibly easy to setup a script for this with Voyager.

The plan, shown in this example, is to get 16 frames, spaced by 50 microns (set by hand to my specific system depending on CFZ, etc.), and inspect each binned FWHM/ellipticity/theta to see if the effect that can reliably be measured and implemented. In the end, I think this process should have an outcome of:

Winter in my area is notorious for bad weather for astronomy. I’m hoping to try this in the next few months to see if it’ll work.

I was actually looking at a way to determine if my spacing was right recently. I might have to give a similar script a try after I work out how many microns per step my focus motor produces.

One thing I did do was a series of focus runs with my refractor, 5 by V curve and then 5 by localfield to establish a good average focus point for each method to compare how many steps difference between them. In my case the average difference between V curve on a centered star and localfield to average the frame was only 8 steps (Which is hard to even see the movement of the fine focus knob for) so I left it at that. My SCT is a different story however so I should do the same on that scope.

Thanks for your efforts in this area. You may want to look into the distortion model output in PixInsight. You get them when you platesolve a raw image (option has to be ticked in bottom section). I am sure Juan Conejero would be willing to share into the analysis code used.
Also, not to promote other software here but Prism, written by Cyril Cavadore (Alcor Systems) has exactly the routine you mention to estimate tilt and backfocus spacing needs. Roland, as you say, promotes this simple analysis and has himself used Prism for it.

Having the above done using a script in Voyager would be phenomenal - so Encore!

That’s a good idea, and toward the same goal with less effort. I’ll be interested to see how those 8 steps translate into a spacing adjustment. Did you make any adjustments and follow-up on the local field vs. robostar?

Thanks for pointing me to some interesting alternatives! I took a look at the distortion model output, and it appears it’s related more towards registration. I’ll take a look at Prism as well.

This is a great project. I’ve been using a very similar dragscript to detect tilt in my rigs. I collect data as you do – from outside to inside focus; I use it with the Optec Leo focuser which has 0.08 microns/step, which makes it easy to collect precise data points.

ASTAP has a utility that lets you plot the data for such a sequence of images. It analyzes the images and figures out the point of best focus for the inner region, the outer region and the four corners, and then plots curves for each against the focuser position. But the plots are not as intuitive to read as what you’re proposing.

You can read the discussion about the ASTAP utility here: https://www.cloudynights.com/topic/690595-what-does-percent-curvature-meanhow-is-it-calculated/page-3#entry9928932

Were you able to diagnose tilt easily with that method? I’m curious and would be willing to inspect the frames in the focus position scan if you are okay with sharing them.

The challenges I ran into were twofold: from the difference in focus positions, it wasn’t obvious how to determine how much spacing to add to compensate; and, it was difficult to figure out the exact direction of tilt from just the center and corner readings, and then to translate it into the right number of turns for the 3 screws on the CTU.

In addition, I was also dealing with corrector spacing issues, which made the analysis more complex.

I’ll send you a PM with some datasets I collected.