I’m pretty new to Voyager. I have set up an Auto Flat sequence for an LRGB setup using a ASI1600MM-Cool camera. I am using a manual flat panel. My target exposure is 30000 ADU with a 5% allowable error. 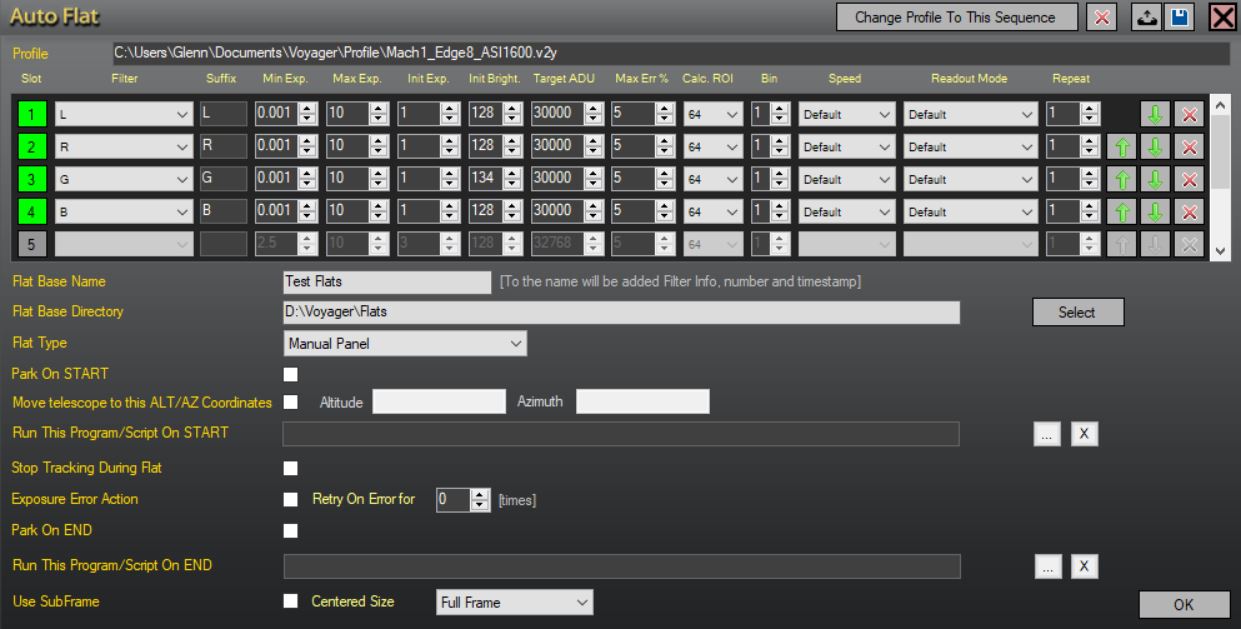 The sequence starts normally but the process continues indefinitely. Voyager varies the exposure until it finds the correct one, but then changes it again instead of taking the flat. Has anyone seen this before? What might I be doing wrong? 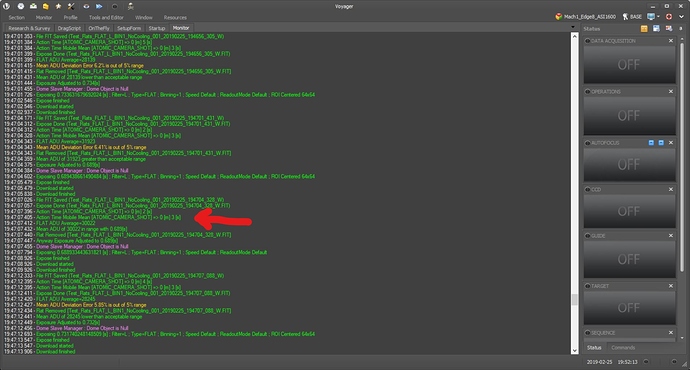 is not a bug … is normal that every times is recalculated exposure. Is not a good idea to stop calcultating exposure time when adu reached.

Your is a linear problem. You ask for a 5% of tollerance and your mean are each time out from 0.8 to 1.9% (yellow warning message in monitor)
The first time you use AutoFlat you must understand about your flat system, probably 5% is to low.
Second thing, if your sensor is big using a ROI of 64x64 pixels to calculate mean of flat is to smaller. Again linear light gradient can change so much the mean with some sensors related to ROI used. Voyager found the calculated mean with ROI to much different (>5%) than mean on all field. Just increase ROI to 128 , 512 or 1024. I think with your sensor 512 could be ok.

This 2 adjustments solve your autoflat.

PS Forget … Voyager have a safety engine inside each action … there is an embedded timeout threaded in each actions that cannot freeze. At finish of this timeout all action will be killed for timeout and action end. Only DragScript,Sequence,Research&Survey Actions can run forever.

I kept the allowable error to 5% but increased the ROI to 512 and then 1024. Both of these worked, but several (to many) attempts were needed to achieve proper exposure.

When I examined the resulting flats, I saw that there was a moderate amount of vignetting. Thinking this might affect the calculation, I changed the ROI to “no”. After doing this, the exposure was found in two attempts per filter and the process completed quickly. The resulting flats had a median value very close to my target of 30,000 ADU. Excellent!

In short, problem solved. Thanks again for your help, Leo.

happy you solved it.

ROI facility its used to shorten the time to reach the time value (smaller area to download is equal to smaller time). If you remove ROI the initial time calculation will be affected from your camera fullframe dowload. If you have slow camera like mine you feel bad. Anyway during adjusting time between flat ROI is not used if ADU is inside %error. If you have a big vignetting at final edge personally i had increasing %error to 8 and ROI to 512. If your camera have a high speed download, remove ROI is the best choice.

I was expecting the process to slow down when using the whole frame, too, but because there seem to be fewer attempts made to find the exposure (E.g. 2 versus 3 or more per filter), using the whole frame actually results in time savings. It helps that my camera only takes a second or two to download a full frame.

Leo, I have a comment about the Auto Flat sequence.

Currently, there are three choices for flat type: manual panel, ASCOM panel device (I think), and Sky. Although Sky is listed, it apparently has not been implemented yet.

Does there have to be a separate implementation for sky? It seems it would essentially be the same as manual panel. The only distinction, really, is that the brightness of the source is determined by the sun in one case and by the astronomer in the other. Maybe the two could be merged into “Manual panel/sky”?

In my intention Sky point with some calculation to the right side of the sky at right hour.
But seems everyon have a different idea and each idea is the best against the others.
For this reason using Dragscript everyon can decide where to do flat on the sky (the calculation each frame is done for this reason). Someon do the narrow in the dawn other user not … so in this way using manual everyone can do what they want. I leave sky because i want to manage better mount tracking and dithering between sub. Manual remain with tracking stop for who like me have a flat field foil with no usb luminosity control.

I hope to answered to your question.

Interesting topic! I just started using Voyager on my second system, which is an SCT. I took sky flats with Maxim and ACP, so decided to try taking sky flats with Voyager using the approach discussed here.

It can be done!

I do agree that a built-in sky flat feature as you describe, Leo, is worth having eventually. Not high priority given the other things on the to-do list.

I used DragScript and slewed to 75 deg altitude, 270 deg azimuth at dawn. I think ideally you would go to “Sun’s Azimuth - 180 degrees” but I didn’t find a function to compute that in DragScript.