I’m just getting to grips with it - in the meantime I’ve been able to do two complete nights of automated exposure - with everything that entails: opening the roof, cooling the camera,…and back again. “Artificial” bad weather also triggers the desired actions.
Today I added the switching on of the individual components, which also works - I am very pleased! I think I have halfway understood DragScript, at least it does what I wanted so far.

Sooner or later I’d like to solve another “problem”: at my location the seeing varies quite a bit - and I’d like to decide automatically whether to shoot L or RGB. The idea is to focus and use the HFD value to decide whether to expose an L block or an RGB block. So HFD > xx → make “Block: RGB”. Ideally, after about an hour, focus again and decide again on the basis of the HFD value. After that, no more decision is needed, because if the seeing is then also medium, it won’t be good that night either.
I thought of the variables, “update decimal with autofocus HFD”, but have no idea how to put that into a script. Maybe someone can help?

Great idea Markus! I’ve had some interest in developing some automatic scheduling of targets/frames. My approach would be based more in machine learning and optimization of SNR while considering contrast loss from airmass/LP, etc. This is something I’m thinking about adding to my planner app.
However, what you suggest is a more direct way - to measure local conditions, namely the HFR. This is interesting, and a more live-based approach rather than what I had in mind. I’ll be curious if something like this can be done with Voyager

I’m writing a little example and I will post about.
@AstroGabe HFR is not a good idea for evaluate autofocus, better the HFD. Voyager use HFD. 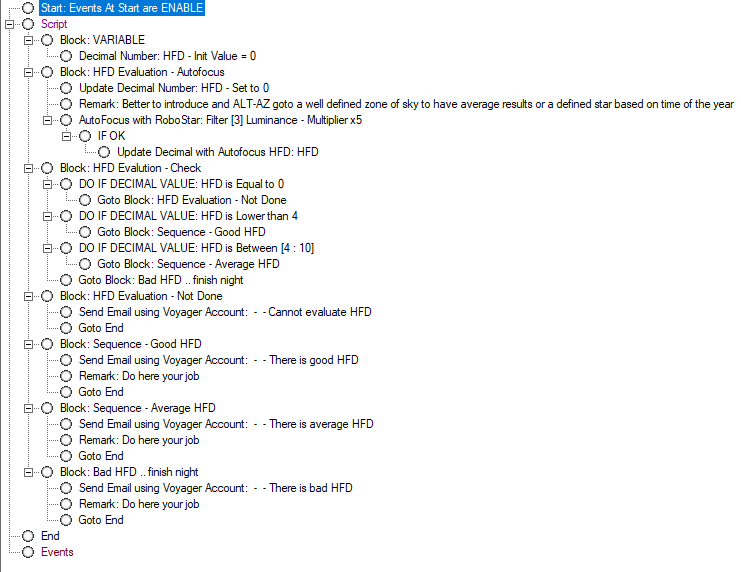 This script define an HFD variable, do autofocus on single star, evaluate the HFD and define wich block of sequence to do.

Not tested on the sky but hope this help.

Thanks for the script, I will test it as soon as possible!
But there are some newbie questions coming up right away:
“RoboStar” - where does this function look for “its” focus star? I can select “RoboStar” in the sequence - does it then search for a suitable star near the object?
Or the other way round (because I like to choose my focus star myself…old-fashioned :-)): if I check “AutoFocus OnPlace” in the action “Autofocus with RoboStar” and slew the telescope to my (self-determined) focus star beforehand (via DragScript of course) - does the update of the HFD values in the variables work then? That would be a dream…

The HFD value can be retrieved only if you use RoboFire like autofocus method.
RoboStar is the Voyager automata that choosing a star and pointing if for the autofocus.
Choosing a manual star can be a choice … like I said to you better to have a reference star always the same. But use the right magnitude stars or RoboFire could fails.