I am having many problems with PHD. It lost guide stars on clear night yesterday. Start out the evening running fine
Now I get this on connect.

I tried using Maxim DL but it usually downloads a black image and won’t calibrate or guide.
Sometime I get a normal images with star but the scope does not move with calibration.

I am using todays build

There is nothing wrong with Voyager.

The error message you have indicated occurs because your PC blocks communication between programs. Add the programs you use to the exceptions of windows defender and antivirus. In general, I recommend that when you get to a configuration that works you do not run more updates, especially if you travel for do imaging (not your case i see dome setting up).

For Maxim Voyager it only sends commands … it does not directly control the camera nor download the images. You have to investigate something else.

If you need help we can arrange a remote session.

latest windows patch has made this problem frequent. do a test, load the mount via the poth hub, then connect everything to it. if it works is a firewall problem.

Communications between Voyager and PHD2 doesn’t need mount connection. The test you wrote don’t help. “Busy error” mean protocol corruption or blocking from Defender or firewall. Using mount with POTH may cause a loose of a lot of ASCOM functionallity.

I had all apps set to run as administrator already. I connected to POTH . It fixed this problem

What functions are a problem? Running Dragscipt test now

Add voyager and phd2 to exception in defender and antivirus. Poth is not the Solution. Problem is two application talking without certification.

It does seem like a Windows 10 update this week has caused new problems with applications talking to each other. I have not yet seen with Voyager but have seen on two machines with other software. When I started TheSkyX it asked for my serial number like it was a new installation. Maxim DL said “could not initialize guider output.” Both were working fine before the update.

I am running Windows 10 home so you can’t turn off updates permanently. Probably worth the $100 to update to Professional and stop the madness!!! Third time in 6 months that a Window 10 update broke things with working programs.

I will see if adding these to the the antivirus / Windows firewall configuration helps. Just a heads up that there is a new Windows update that has caused some problems.

Poth is just a backup temporary solution. As usual, we should disable auto updates to avoid those disasters

And Windows 10 updates always seem to happen on a good observing night with a clear sky and at least several hours of no moon!!!

PHD was already listed as ok in the Firewall. Defender is not on.
I have noticed that PHD connects intermittently without error without POTH.

Last night with POTH connected to PHD my dragscipt and Sequence ran just fine.
I will continue test both configs.

Even with updates off , we have to understand how to fix Win10 latest problems.

If you have win10 … disable Defender is an option to evaluate. Because window switch on Defender without ask to user. 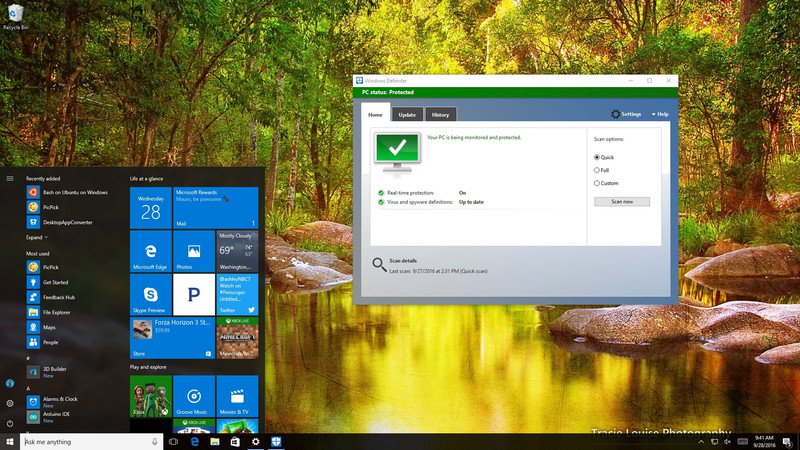 How to permanently disable Windows Defender on Windows 10

While Windows 10 doesn't offer an option to uninstall Windows Defender, you can still permanently disable the antivirus, and here in this guide, we show you how to do it.

“PHD2 is busy” is a courtesy error message from Voyager when a command from Voyager was not executed by PHD2 and go in timeout. This mean Defender or antivirus are blocking tcp-ip connection, inspecting packet in tcp-ip connection, guide camera is freezed , phd2 is freezed and if you not use ST4 (and i recommend to use it) and use mount … mount driver is blocked or phd2 freezed waiting mount driver. Voyager doesn’t need mount connected to PHD2 also a lot of mount driver doesn’t allow more than one connection.

If you add exception in defender for file, dir, process you are sure to prevent OS side problem with reasonable success.

Also you can postpone the update since to 180 days in win10, if you do update scheduled you could avoid this update problem. The best is to use previous OS for observatory PC.

POTH work because mantain ASCOM status , work without tcp-ip … but this mean PHD2 receive old data from the mount.

I think to have said all about.