Its my very first time using Voyager and I am having a connection issue.

As of now, I have only connected the camera, EFW and the mount. Everything connects well from the Startup menu. Goto from onthefly works if that is the first thing I try, goto home works well too, most commands (at least the few that I have managed to try) work well from the web dashboard as well. But the the problem starts when I initiate park command from Commands - parking is attempted but fails and gives me a timeout error, mount widget hangs (camera and efw widget still work, mount widget (only) still hangs even if dis and reconnect everything from the Startup menu. All this while, the mount still works from iOptron commander and even from cdc.
I am currently running Ascom 6.5SP1 - 6.5.1.3234
Please help and let me know if there is any other information I need to provide to better understand what the issue could be.

Where do you have the mount parking? I can not use my preferred park position with my CEM70G (The home position, which I used to set as a custom park position) as it does not park properly there. It will go to the set park position but it actually does not stop tracking.

If I used that position with Voyager it would make the mount widget look as though it had hung when park was requested but it actually isn’t. Voyager is waiting for the mount to report that it has finished parking and it never does that. It will timeout eventually and then all goes back to normal in Voyager.

If you are parking at the home position via the custom park setting I would first check that the RA stops when you get to the park position, and if it does not, try one of the preset park positions.

Call from dashboard or from Voyager is the same thing. Web dashboard can abort his command to the application server but this not means Voyager stop the commands. Your problem is about driver. Something not work at driver level for parking. Voyager use the ASCOM command park nothing else … without parameters. Parking is up to driver, in some case you can define your park position with ascom set park in voyager. Otherwise you can use the simulate park in Voyager and send the alt az position.

My advice is to fix problem in driver and/or ask support from IOptron. Be sure before you have the last firmware installed and the last ascom driver. Activate the ioptron mount log before send it to the support.

If you are interested in how we have configured our CEM60 in Voyager in Official Voyager Observatory this is the screenshot: 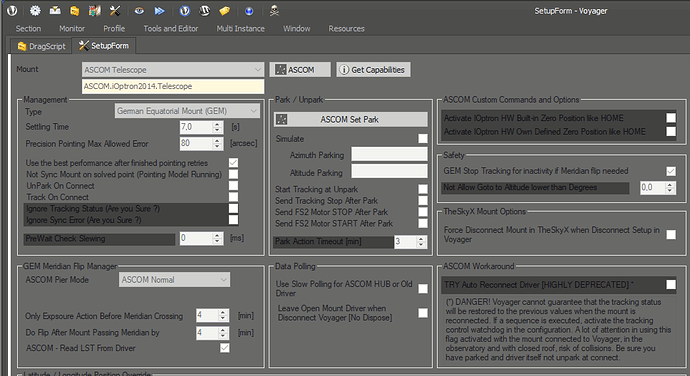 Thank you for your response and suggestion. I have just reached out to iOptron for support in this regard. Hopefully should be resolved soon. Will update the thread once I find a resolution.

You are welcome. I remember to you and to all that if you need official support this is the right way: 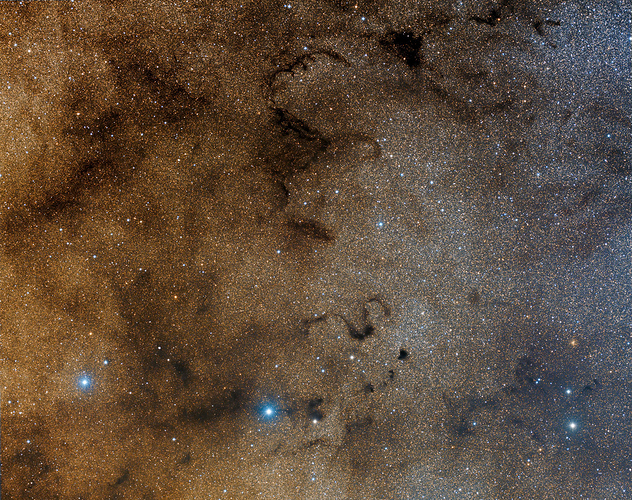 Thank you for posting the screenshot of your Mount Setup!!

I have an iOptron CEM40 and spent multiple hours over the past week trying to figure out how to get Voyager to run my mount. I have all up to date drivers and Voyager would connect to the mount but I ran into problems when it was attempting to slew to the object. It would simply fail.

My last resort is usually to contact support. For some not so smart reason, I like to try and figure things out without help, then search for an answer on the web. I appreciate that you help people solve problems in these forums. A solutions forum in conjunction with voyager support will benefit the user base as well as the uptake of the product.

support is a product for Voyager. Problem on slew is a problem of configuration of mount/driver and not of the automation software.
So I dont understand your point of view and your post but its ok.