I just got a Mesu 200 MKII mount that I will be installing in a remote observatory with Voyager. I tested the system last night and it performed very well. The only thing I could not manage to do is to dial in the Meridian Flip configuration. I have been using Voyager for a few months now and had no issue at all with both a CEM 60 and a MyT. So I guess it has to do with the Sitech Ascom driver.

What I observe is that, whenever the time for a Meridian flip comes, the mount does not respond to the slew commands.

I had tried this also indoor with the same result.

I wonder if there is any Voyager user who is using the Mesu 200 who can help me dial in the right configuration.

the first user using with Voyager a Mesu200 have problem for meridian flip, they have changed the ascom driver to fix some issues and all work fine. So be sure to use the last version of ascom driver.

After this setting to respect overall for the mount driver is:

Thanks a lot Leonardo!! I am using version 0.94N of the ASCOM driver, which is the latest in SiTech´s website. I´m ask the directly if there´s a more recent one.

I think it might also have something to do with the SiTech driver configuration.

Have a nice weekend,

You are welcome Jose.
Let me know, have nice we too.

Wonderful Jose and thanks for the feedback.

I tested the MF indoors today and it is clearly a limits setup issue. The last version of the ASCOM driver (0.94N) works fine with Voyager as long as the limits setup in SiTechExe allows Voyager to manage the MF. 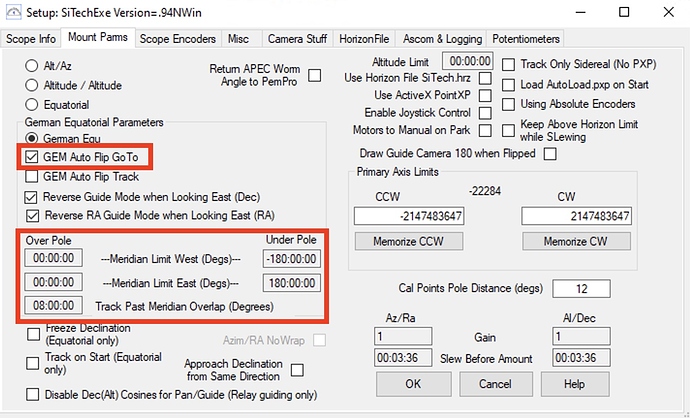 I have set the Meridian Limit West (Degs) to 0/-180 and the Meridian Limit East (Degs) to 0/180. So the limits after which the mount should stop tracking are precisely at the meridian. Some people leave some extra margin, but I think that this is not really important, since the key parameter is the Track Past Meridian Overlap (Degrees) . This is the region past the meridian limit where you allow the mount to keep on tracking. More importantly, it is the region where a GoTo will actually produce a MF.

So I set the Track Past Meridian Overlap to a little bit more of my maximum exposure in Voyager. If this value is set to zero then the mount stops tracking at the meridian limit.

In such a way the mount will continue tracking the value of Track Past Meridian Overlap degrees past the Meridian Limits (which in my case are set precisely at the meridian) and while in this overlap region it will flip whenever Voyager issues the MF GoTo.

In Voyager all the time setting in the Mount Setup panel and the Session Meridian Flip tab must be within the Track Past Meridian Overlap region.

So ready to do my first full session with this new mount.

Thanks a lot for your help,

Note: I deleted my previous post since I found out I made a mistake in the Meridian Limits Under the Pole which could result in a pier crash. The signs were inverted.

The latest version is currently 95H, but this isn’t shown on the Sitech website.
If you go to the groups.io website and search for the Sitech forum, you will be able to find a link to download the latest.
For some reason, the version on the website isn’t updated very often, and the latest shared on the groups.io Sitech forum is always considered beta.
Strange, but I guess they (he) have their reasons.

Yes, I saw that some people mentioned the 95H version on the forum but did not know where to get it. Thanks for the tip

A very useful insight into how to set up a Mesu 200 in Voyager.

I had been trying to flip the pier before the mount was in the Track Past Meridian Overlap zone. I changed the config file to something similar to what you have. It worked immediately under NINA, but still failed under Voyager.

Looking at the Voyager log file it looks as though when the meridian flip was actioned, the mount decided that it was already on the right side and so did not flip. So I guess either Voyager or SiTech.exe are confused as to which side of the pier the telescope is.

How do you set Voyager to pick up pier side?

In your case the mount not do the meridian flip (slew time is zero) … nothing related to Voyager.
Your mount report meridian is to do and the mount passed from 3 minutes and 39 seconds the meridian.

I´m glad you could make it work with NINA.

Here´s my setup in Voyager: 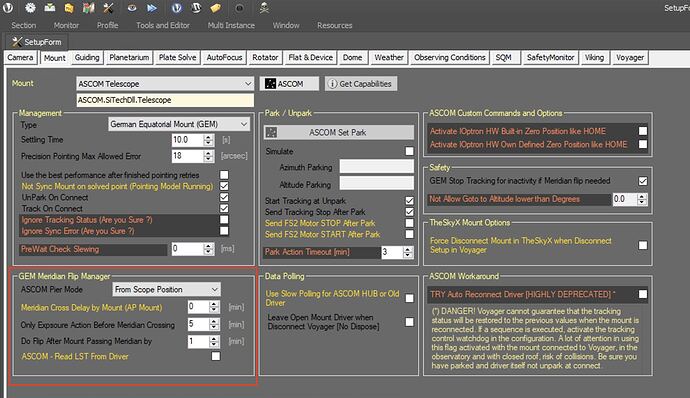 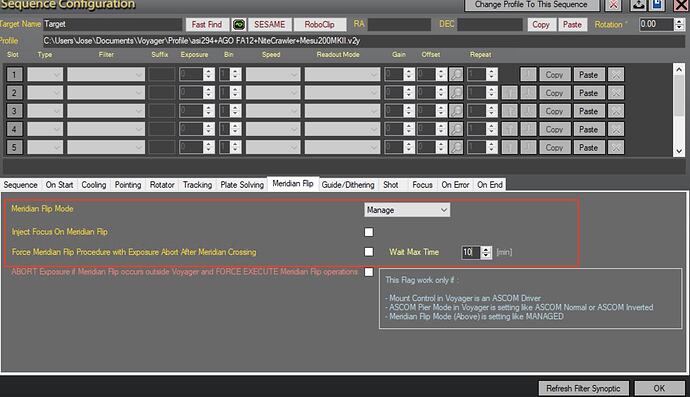 As in SiTech.exe I leave more than half an hour of overlap and my exposures are never that long, with these settings I make sure Voyager manages the MF before the SiTech.exe flip range passes.

I have not checked the logs, but can do it next time I image.

One thing I would recommend though, is not to do your Initial Offset Init at the zenith. It can be ambiguous regarding the side of the pier you are in. SiTech.exe expects by default that the Telescope is pointing WEST at the Offset Init. So wat I do is to place the telescope with the counterweights down but the scope pointed to Azimuth 270 degrees.
Then I open Skyview and do the Offset Init on the West horizon (check that the blue pop up window shows an Azimuth of roughly 270).
After this I immediately STOP the mount and SetPark at that position.

Jose, if the driver report the pier side like what i see from other users and from log above I suggest to use the ASCOM mode for Meridian manage instead from the scope, this allow more control. Thanks for sharing your settings but the solution is in the driver settings.

One thing I would recommend though, is not to do your Initial Offset Init at the zenith. It can be ambiguous regarding the side of the pier you are in. SiTech.exe expects by default that the Telescope is pointing WEST at the Offset Init. So wat I do is to place the telescope with the counterweights down but the scope pointed to Azimuth 270 degrees.
Then I open Skyview and do the Offset Init on the West horizon (check that the blue pop up window shows an Azimuth of roughly 270).
After this I immediately STOP the mount and SetPark at that position.

Thanks Jose. I did wonder if that was the source of the confusion over the pier side. I will test out your method and see if it helps.

Just for your info, if you use “From the Scope” like meridian mode. Pier side not coming from mount.

Forgive my lack of experience with Voyager, but is there a method to make Voyager wait for a time for the Mesu mount to auto-flip and then restart with a platesolve and centering of the target? Is that something I need to do in Dragscript?

Voyager reports the time remaining until meridian. Can I use that to pause operations and restart after a meridian flip? It would be useful because then I know the safe control of the mount is done by the SiTech software adn hardware and there is less risk of conflict.

Voyager take care of meridian flip since 2009 and this is not the scope of an automation software to loose control of things but if you want you can put a long time in after meridian Do Flip After Mount Passing Meridian by:

And please read careful the indication about you have this:

My suggestion is to allow mount flip without delay like other mesu owner. But you are free.

Many Thanks Leonardo. I will work my way through the inforamtion you have provided.

I know there is an answer that works for me, I just need to find it!

Again, thanks for the prompt response.

You are welcome, just I want to be sure in the forum remain the rights info and the right disclaimer.

Thanks for the tip. I will select ASCOM instead of From The Scope.

As per settings. It is a SiTech.exe settings issue, ofcourse, but as far as I experienced, theSiTech.exe settings must be consistent with the Voyager ones. That’s what I meant in my answer to old_eyes. In my case I set the SiTech.exe limit long enough for my longest exposure to be able to finish before the flip, but still short enough to avoid a pier crash.

Thanks again for tour quick reply. It is a fantastic level of customer service. Best Regards,