Hi,
I’m moving house to a slightly darker sky and will have to build a new small observatory. This will need to run from a couple of 100amp hour deep cycle batteries as it would be cost prohibitive to run mains power to the obs site. I will therefor need a 12 volt mini PC to run the obs - what would be the minimum cpu config that would effectively run Windows10, PHD, and Voyager? Would an *GB ram J4125cpu be enough, or would I have to go more upmarket? Thinking about something like this: 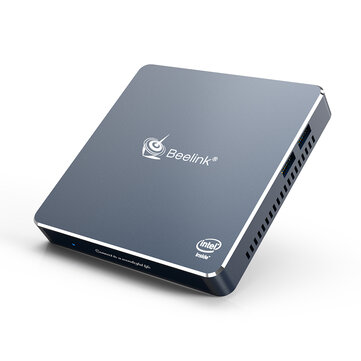 depends on your camera. More MPix you have and better PC you need. I using an A10 AMD 4 core minipc and 8MB of RAM with my QHY600. I think the PC you linked is really nice.

Dont’ worry about performace of your J4125/8GB. I don’t use a miniPC, but a laptop PC/tablet HP Pavillon (“transformer”) X2, with very old ATOM Z3736F (1,3Ghz) and only 2GB RAM and 32GB + 128miniSD card of storage and Win10 home. It runs Voyager with MaximDL and Qhy9 Camera, CdC (this is very slow) , PHD, ASTAP or ASPS, Stellarium and teamviewer, without any issue. Sure the plate solving in not so fast compared to some latest PC, but 2-3 sec more is not an issue as i preferred the power saving (5V/10W) vs performance. My PC is powered by a USB-C plug, and it was able to last till 2 nights in summer with an additional simple 20000mAh USB powebank.
At the end, only CdC is really slow, (Stellarium with OpenGL run very well). I open CdC only to gather object coords!
Cheers
Fabrizio

and only 2GB RAM

Fabrizio this not work with some CMOS and CCD camera !

Fabrizio this not work with some CMOS and CCD camera !

You probably are right. But I’m not suggesting 2GB RAM. Today 8GB is a MUST! Just I like put in evidence that our softwares during exposure session don’t eat up a lot of resource. I mean mainly for deep sky! (HiRes is probably different)
If the main SWs work with my very poor processor, surely all it’s ok with new Gemini Lake J4125 and additional RAM. I share a simple benchmark comparison below 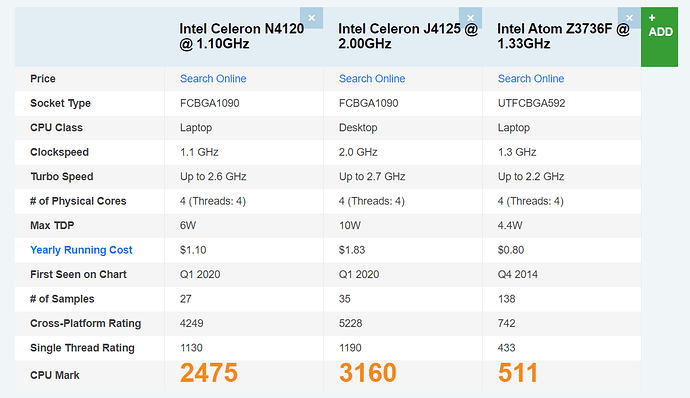 You probably are right.

Not probably … I’m sure … I’ve tested.
if someone has an old PC and wants to reuse this is to take into account.

Gary will take new so no problem, but for those who reading the thread better to leave this clear.

Gary I have a slight better version of this computer. I have several CCDs, the beast is an Apogee 8MP, really big fit files and I don’t feel it is underpowered, I could still run some stuff while having my full voyager setup running. CdC is slightly slow though, but I would say you should be fine with it. About power consumption, honestly I don’t care much since I have mains power to the setup

Thanks so much for all the replies. I will be ordering the mini pc after I move house at the end of January. Not having any familiarity with the low end processors, I was unsure whether hey would be enough. Now that you all have reassured me they are fine, I can continue planning my new setup. Looking forward to having darker skies. The map attached shows where I am currently - red dot and where I’m going - black dot. Must be better than now!!! 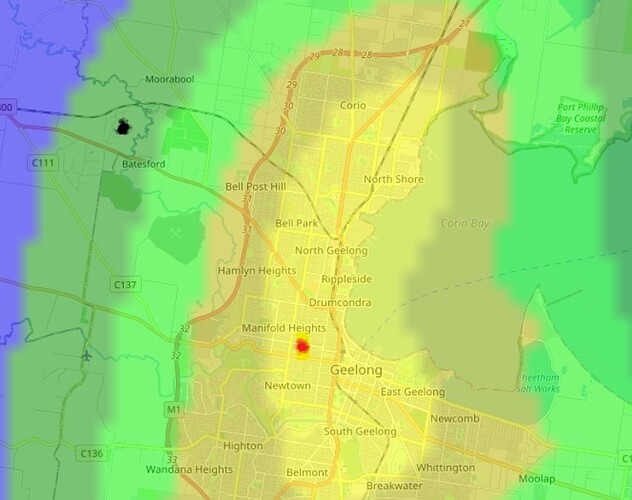 Hi,
I run Voyager in a bunch of crappy computers, and it works perfectly. I only use the computers to run Voyager, nothing else. For DSO it doesn’t matter much.

IME the important part is the RAM and the Camera. For instance I have an old Atom based laptop with 2GB of RAM and 32GB of SSD and it works fine for mono cameras up to 16MP. My guess is that any PC with 8GB of RAM will work perfectly for any of the current cameras including the 60Mp CMOS.

I have used many different capture suites and Voyager is by far the less resource intensive program. It literally resurected my old PCs.

I am running Voyager on two small form factor boxes, both Intel NUCs.

I should swap them around as they are currently sitting on equipment in the order I built it and I have the lower powered NUC matched with the newer camera that produces the larger file sizes, the only noticeable difference apart from the obvious image download time is the lower spec one takes a few seconds longer to plate solve, most of the plate solving time difference is in the PS2 background estimation and subtraction stages.

I have an I5 8th generation NUC running an Orion Atlas pro with an SCT, ZWO ASI294MC Pro camera and off axis guider, Voyager, PHD2 and Cartes Du Ciel running plus the normal background ASCOM and mount drivers etc. The other is an I3 10th generation running an ioptron CEM70G, ASI2600 with Voyager, PHD2, Cartes Du Ciel and ASCOM plus mount driver. Both of them are running from 12VDC supply via a 12V-19V DC to DC converter. I have 8G of RAM and 500G M.2 SSD in both.

I use a qotom industrial pc off amazon. It has plenty of power for capture with a Celeron pc. I’ve tried doing minimal processing and it’s a bear (mostly just reduction).

I do have a 10” screen for it and a BT keyboard but I usually just remote into it with my phone.

In my observatory I use a Minix N42c-4 which I added a 256 Gb SSD and up’d the memory
to 8 Gb. It runs on 12 volts and takes little power. It is also fast enough to run everything that
I have, Voyager and all the bits it controls as well as run the computer through Remote Desktop.
It comes with Win 10 Pro installed. I am trying to set it up now for Wake-On-Lan so I can completely
remote start my observatory. My cordless keyboard will not put the Minix into the Bios so I have to
look for a wired keyboard, I think I threw all those out years ago!