I have planned a 2x2 mosaic with the mosaic planner in the dashboard and then photographed it. Because the weather was good, I wanted to extend it with a few panels. I noticed that there seems to be no possibility to extend an existing mosaic - in my case I added a column in the west for the first extension and a row in the south for the second extension. Maybe I’m overlooking this feature - but if it’s not there, I think it would be a useful addition. Something like “take the existing mosaic, add x panles left / right / top / bottom - and give me the possibility to transfer these new parts with roboclip”.
I re-planned the entire mosaic and tried to match the image section as perfectly as possible in the planner - it worked, but was a bit tedious.

you can expand moaic under Mosaic and Research Section in Voyager, just add panel on the grid.
If you want to expand in WebDashboard you must get the same center and create a new mosaic with the number of panels you need for sure all the panel center will be different. Also you create a new panel mosaic expandi the previuos just positioning right the center, get the new panels and add to your previous mosaic and research sequence.

Ah yes, that I can add panels under Mosaic and Research Section was not on my radar. But where do I get the coordinates for the panels?
You describe my problem in the dashboard exactly, I’m attaching two screenshots just to be sure. 2x2 Mosaic should represent my started or completed mosaic. Now I would like to attach two parts on the right. Simply switching to 3x2 in the dashboard is not the ideal solution, because completely different panels come out, but I have already finished the first four. So I have to move the star map in the background so that it fits exactly into my first four panels - then I can easily get the coordinates for the two new panels. But moving it exactly is a bit “fiddly”. That’s what I meant by saying that it might be nice to be able to “stick” panels to the finished mosaic wherever you want.

Markus if you add panels to a mosaic with the same center all the panels change coords. What you asked is not possible, you can get an image of your mosaic (like the one you have attached and use like reference (opening for example in paint) and create new one to be closest to the previous.

I have added panels after I started but it takes a little work.

Normally I image individual panels in a single sequence dragscripts on different nights. What I have done is to reload my original mosaic in the virtual field of view and then increase the number of panels, if you increase by an even number (Say 2X2 to 4X4) you will end up with a 4X4 block of panels, but the central four will have the same coordinates as your original 2X2 mosaic. Then you need to work out which new panel numbers you need to get the overall field of view that you want (As the panel numbers will not match your original 2X2 mosaic) and put them in individual sequences as I do, or put all the panels you need in the mosaic and research section, then discard the panels you don’t want.

Single panel to 3X3 example below, panel 5 in the 3X3 has the same center as the single panel. 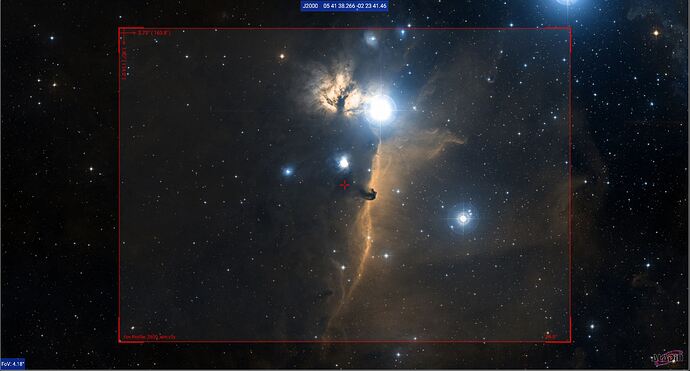 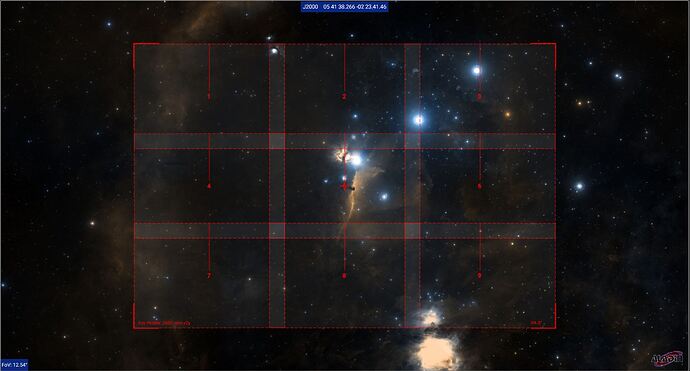 Thank you for your help!

Paul, this is the perfect workaround, thank you. That’s how it works, you can simply ignore the “surplus” parts.