I have been looking at Voyager and plan to give it a try. I currently use SKYX Pro for most camera, guiding and mount control. I also have Maxim DL Pro and SGP.

I have a new (to me) 10Micron 1000. Does Voyager have mount control built-in? Or, do I use one of my other programs for that? I am imaging unguided and SKYX doesn’t automatically flip by default (requires a script).

I also want to be sure the scope/camera doesn’t slew into my concrete pier past the meridian. The 10micron mount has settings for the meridian but the mount just stops from what I understand. I can slew past 20+ degrees depending on the target and Dec position. Slew limits would be good based on the position and then I want the mount to auto-flip.

Any 10micron users that can let me know what you are doing?

I also have a separate L-350 eq fork that I may use with Voyager. No flip required for it. Any input on that?

Voyager manage 10 micron mounts without problems.
Settings about from a user of 10 micron, just allow mount to not stop at exactly meridian cross and continue tracking for the time you ask in voyager plus the more longer sub you are usual to do.

Hi. We are using Voyager with a GM3000 mount. Can anyone using 10Micron and its driver share the proper setup to handle meridian flip when using Voyager for sequencing? Settings in both the 10Micron driver and in Voyager would be appreciated. We want to ensure that the mount restarts tracking after the flip. Thanks. Andy

Remember that each ° is 4 minutes.

If you have a fork mount also just set fork type in voyager setup, anything else, Voyager will not arrange a flip.

Thank you, Leonardo. I will read that.

This how I’ve set my system:

On the keypad or vkeypad :
Set the mount slew limits to 5 degrees (or whatever is appropriate for your equipment) so the mount will stop and prevent damage.

In ASCOM driver:
b) Unassisted flip off - Voyager manages any flip very well.
c) Enable sync/as refine off - this will protect your mount model.

These settings work well for me.

Robert, Thanks so much. That will help get things setup quick. I should have time to test again next weekend. Voyager looks really good. I may test with simulators for now.

No problem at all - let me know if you get any issues and I’ll try and help out.

I’ve been through a few different programs (the usual suspects) and Voyager is, by far, the most flexible, stable and controllable of them all. As with all sophisticated programs it takes time to master but it’s well worth the investment.

Btw I was caught out recently. My ROR didn’t close and after further investigation I found that I hadn’t tightened the GM2000 clutches enough - they loosened when the temperature dropped and the slew to park didn’t go anywhere … something to watch out for. I think later models had a slightly different design.

Robert, What are you using to control your roof? It sounds like you have something to keep the roof from closing if the scope is not parked. I want to do that eventually. For now, I have to get up in the middle of the night and shut things down.

A roof controller and interlock system is essential if there’s a chance scope and roof could collide. I’m using a Lunatico Dragonfly for that together with four reed relays; one each for a) roof open, b) roof closed, c) RA parked and d) DEC parked. I also use a Cloudwatcher for weather safety monitoring.

Robert, You are right it is essential. That is why I have to get up in the middle of the night to shutdown.

I am in the USA. I looked at the Dragonfly once. It seemed to be a European product. I didn’t see a USA vendor. Still, I could order one from Europe.

How do you make sure the scope is parked? Do you use an IR beam and pickup? Is there a way to use the relay on the mount/scope instead? Any good documentation on this?

I really want to get my ROR automated eventually. Something like Cloud watcher would be good as well. I like the fact that Voyager can integrate all of this.

IR beam - no just simple magnetic reed relays sensors stuck to the axes with double sided foam tape and wired into the Dragonfly. When each axis relay aligns with a magnet it closes, the Dragonfly is programmed not to close unless the mount sensors indicate it is parked - that is the fail safe no matter what it is commanded to do by the controlling program.

Thanks for this writing up. It does look a bit different than the write-up Leo posted earlier in this topic though.

I am also trying to set it up for the first time. Questions I have is about “unassisted flip” and “Enable sync” in the ASCOM setting, which your method differ from Leo’s instruction.

For “unassisted flip”, am I understand it right that by unchecking this, the mount will stop at the slew limit (set in the handpad? and in handpad “5deg” means it stops 5deg after meridian?); However since we are going to set it in Voyager and flip at an earlier time, it would be controlled by Voayger just fine?

For “Enable sync”, I suppose we usually don’t want to sync back the mount after creating a model, hence I believe that’s why it’s set to uncheck. However reading the instruction in ASCOM driver, I understand as we need to check it while building the model, then uncheck while actual imaging? Does that mean we need to disconnect after modeling, change ASCOM setting, then re-connect?

Thanks and sorry if rookie questions.

Your question brings up something else I wonder about. Since Voyager integrates with programs like SKYX, can I use Tpoint to update points in the 10micron mount if I set “Enable Sync” to on? That sure would be nice. I can run a 100+ point model with SKYX/Tpoint.

You must allow mount to pass meridian and continue to track without stop for the time in "Do flip after meridian cross " in voyager meridian settings plus the longest sub you probably can start (if you put 5 minutes and you do usually max 10 minutes shot put 15 minutes in 10 micron mount setting 15 / 4= 4 degree , 10micron work in degree).

Also you must allow mount to not flip for at least 2° after the meridian cross to avoid early meridian flip not desidered.

Not use sync if you use TPoint.

Not necessary to uncheck unassisted flip, this is a setting of the user who wrote the doc, its a Voyager’s user have this mount 6 years ago and kindly help me to report the settings.

Leo is right (of course) and I think that is basically what I said. The slew limits are there in case, by chance, something happens to the PC - it is powered off/Networking issues etc. The mount will be either tracking or slewing during an imaging session so the limits are a fail safe. The limits must be futher than the maximum amount needed to finish a sub in voyager.

Regarding the model, changing the ascom driver sync settings are something I do whenever I rebuild it - turn them on when building and off again when finished. The model itself can be built with Voyager - somebody has documented the method in another post but I currently use modelmaker.

A bit later I’ll post some screen snips for reference.

These are my settings:

Flip Slew Tol: 2 deg - won’t slew further in the direction when it gets to within 2 deg of the meridian.
Flip Guide Tol: 5 deg - will track to 5 deg past meridian. 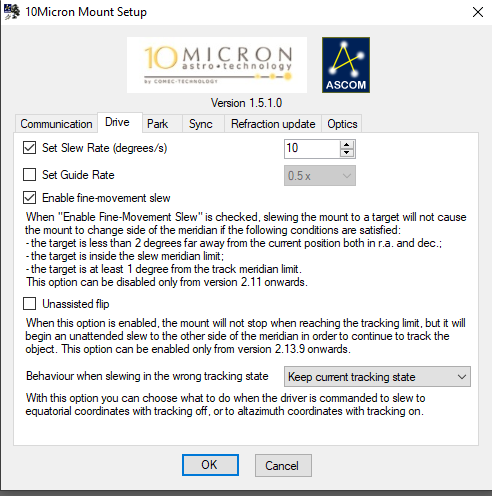 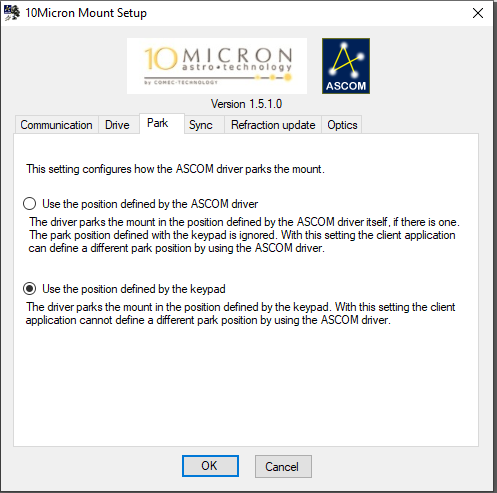 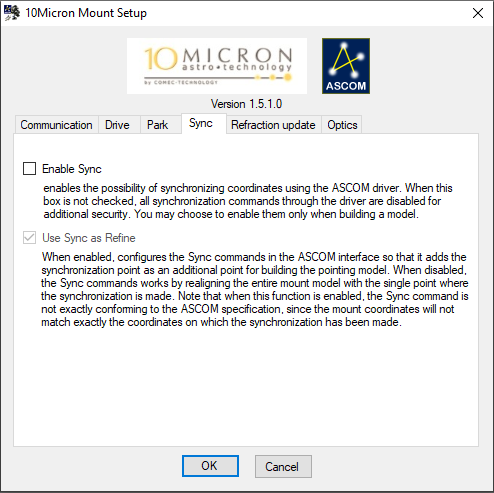 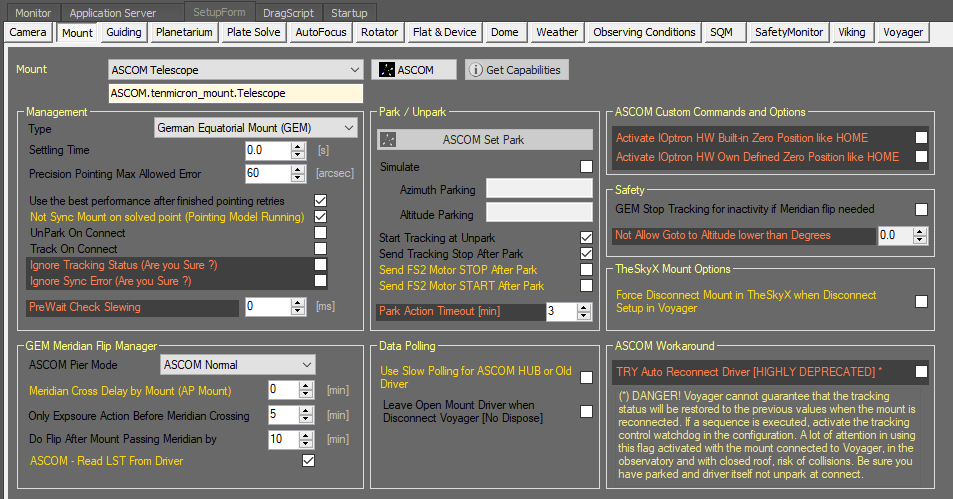 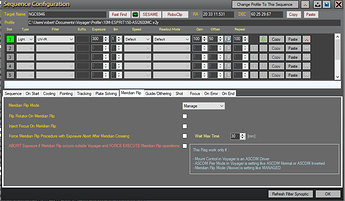 The ‘Action before meridian crossing’/‘Do flip after’ should be adjusted so you don’t loose any subs because either the mount has reached it’s limit or your sub length runs into the ‘Do Flip…’ in Voyager.

I hope these are useful and if you have better settings or spot any errors then please let me know.

Note that I use an MGBox connected to the mount to supply date/time and refraction data, hence ‘Read LST from Driver’ is set.

I hope that helps
Robert

For Voyager setting if you using an ASCOM driver for mount better to use the ASCOM pier mode not from scope but ASCOM Normal or ASCOM Inverted (depends on your driver). In this way you know real pier side and not one calculated from Voyager based on geo/astronomical data from mount. From scope is reserved to who use TheSkyX like mount or have an ASCOM driver that not support pier methods.

Thank you so much Robert.

Thanks, Robert and Leonardo. The screenshots are great(Robert).

I will have time to try Voyager this weekend…maybe tonight if I get to my dark site early enough to setup. I know SKYX Tpoint models won’t work for the 10micron. But, Tpoint will do an easy modeling run and I will try and see if I can get it to update the 10micron as it gathers and plate solves the points. I have Model Creator but am much more comfortable with Tpoint.

Does Voyager have it’s own automated pointing model routine? If so, where will I find that?

Thanks Leo. I’ve adopted those settings, will update the previous post so there’s no ambiguity.

Edit: I use the SkyX but not tried a tpoint run on it - let me know how you get on. Remember you will only need 50 or 60 points for excellent performance and don’t forget to get the PA as close as you can.

Voyager does not have one built in but check the threads as someone has done something on the front.

Robert, I will let you know if it works. I have to push my Skypod dome around and Tpoints “sort for dome” really makes it easier. It is really fast as well with capture and plate solving. If SKYX doesn’t work, I have MC working.

FYI…My other scope is in the ROR. Someday I want to have an automated dome or ROR for the 10micron setup.