Hi Peter, it actually got a mention very recently on here. If you are using PHD2 for guiding, install the latest development snapshot (Which includes multi star guiding) use “Native guide control” in your sequences and select multi star guiding in the guiding tab in PHD2.

I tried it out a couple of nights ago but it was a very ordinary night and it was hard to tell if it made any difference to guiding quality or not. It certainly did not appear to degrade it. That was with the inbuilt guider of an ioptron CEM70G mount.

You must download the develop version. For use with voyager please not use RoboGuide but native star selection method in OnTheFly or in the Sequence configuration, and remember to select the multistar guide checkbox in PHD2 settings: [immagine] All the best Leonardo

Not sure about the persistance of the Multistar guide flag in PHD2 setting form, something to check for who are lucky to not be in lockdown.

If this happens probably they need to fix the setting or give to the 3rd part developers ability to fix the flag.

My gear was set up in the garage to shoot darks so I just checked. The multi star flag appears to stick.

thanks for the feedback, this happen also in my test with simulators.

Here people clam that multi-star guiding works well for them. Planned trying today but we have strong winds and clouds. I will share my observations after I hopefully try later this week when the weather improves.

I have been playing with it and enabled it in the past 2-3 days. It’s definitely not hurting and it’s easy to just enable it in the PhD. In some cases I feel there is an effect of smoothing things a bit, but very subtle. I am even still using Roboguide to select the guiding star and it doesn’t seem hurting anyway… So, it’s usable, it works.

Thank you @yzhzhang. Any significant improvement in your guiding? In desert I am able to get RMS around 0.5 RMS, but from the city which is close to the sea shore it’s around 0.7-0.8 at the best. I really hope the new multi-star guiding will improve.

Thank @yzhzhang … I suggest to not use RoboGuide because I dont look at PHD2 code and I dont know if they need to have a particular kind of first guide star.

With my short experience I don’t think there is a significant improvement on RMS. I regularly getting 0.4~0.5 total RMS from backyard. It’s hard to tell if it improved…

What matters the most is what the images look like. Don’t go OCD about the guider’s RMS.

Anyone use OAG with multi star guiding? Since FOV in OAG is normally small, there may not be enough stars to find. 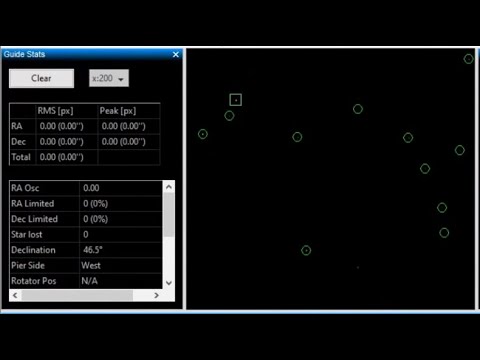 I tried PHD2’s Multi-star guiding yesterday for the first time. I didn’t change my Sequences and still had Roboguide picking out the guide star. PHD2 still went for multi-star guide and guided away. I don’t really have enough data to measure if the stars were smaller/rounder or if I have better images but the overall reported FWMH in my raw image analysing tool (MaxSelector) reported figures that were 10-15% smaller. Maybe the seeing was better overall.
In any case, I changed nothing in my Voyager routine and PHD2 did its thing with the new algorithm.
Just thought I would report in case it’s of use to anyone.

Thanks Roberto, my side happy all working without changing anything.

A quick word of caution for anyone giving the dev version a try.

In the guiding tab of advanced configuration, check your “Reverse DEC output after meridian flip” setting before and after installing the development version. It seems that it flipped the setting on both of mine but I had not looked a that setting for a while and only spotted it on one of the setups as one requires it to be on and the other off. One worked flawlessly all night last night and the other failed due to guiding errors immediately after flipping as the first DEC guide command of any significance would send it off target and then it would march off the PHD2 graph until the guiding watchdog in Voyager triggered a recenter. If I had stayed up ten minutes longer I would have seen it and saved the rest of the night but I went to bed as soon as I saw the initial plate solve exposure after the flip was on target and the trouble started a couple of minutes later!

I did not spot it previously although I initially tested it on that mount, conditions were so poor that night that I packed up before the flip. None of this is Voyagers issue, but if you do try multi star in PHD2, check your settings after install.

I installed the latest Beta PHD2 to get the mutistar guiding but theres no mention of it in the guiding box in the brain - no box to tick? 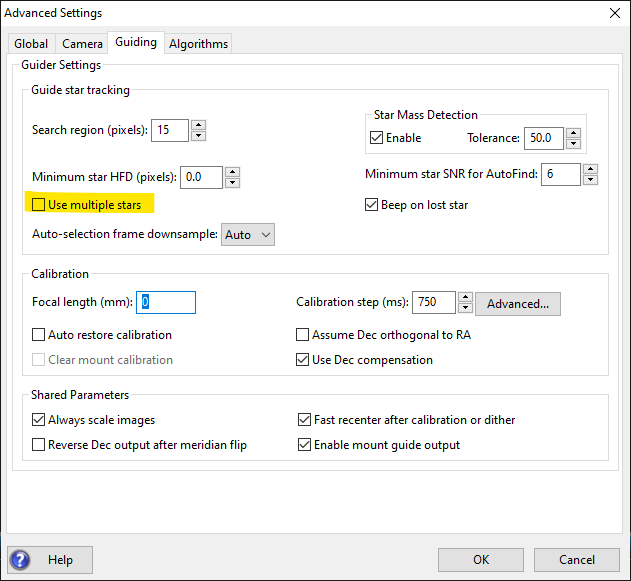 I don’t generally guide with PHD but I thought I’d try the multistar version on my NEQ6. Everything connects ok except that I get the following message on the startup form and also in the Voyager log file:

I’m unable to fully test till I need to use it in anger so just wanted to know if the Msg can be ignored. Everything looks ok but that’s literally just everything wired up on the bench for checkout.