NGC 1532 with Voyager from Atacama, Chile

NGC 1532
Along with the smaller galaxy NGC 1531 this pair of interacting galaxies islocated about 55 million light-years away from Earth in the southern constellation of Eridanus.

NGC 1531 – the small galaxy with a bright core lies just above the center of its companion and is a lenticular dwarf galaxy around 20,000 light-years across.

NGC 1532, the large galaxy is a nearly edge-on, deformed barred spiral galaxy about 180 thousand light-years across. While It may possess several dwarf companion galaxies, it is clearly interacting with NGC 1531.

These two galaxies lie so close together that each feels the influence of the other’s gravity. As a result NGC 1532 became distorted: one of its spiral arms is warped and plumes of dust and gas are visible above its disk. The interaction has also triggered bursts of star formation in both galaxies. Especially in NGC 1532 where a whole new generation of massive stars has been born, visible in the spiral arms.

In addition, material may have been transferred to NGC 1531, which shows an S-shaped dust lane crossing its center. Over time the gravitational interaction of the two galaxies will tear the NGC 1531 apart and merge its remains with NGC 1532. 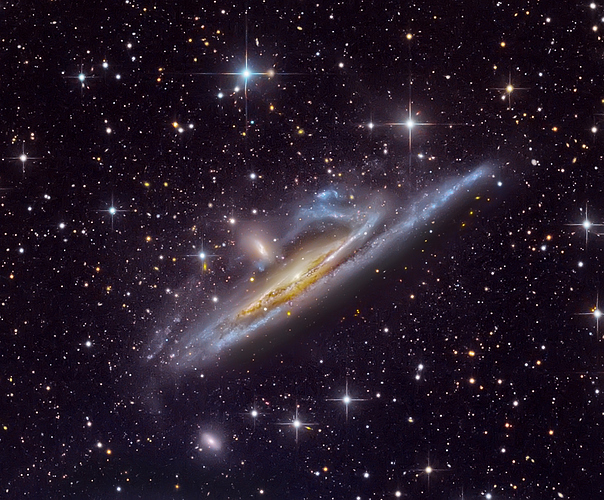 Wonderful image Mike, honoured you using Voyager for this kind of results.

all the best
LO

Stunning image of a “sky monster”: congrats, also thanks to Voyager…

Voyager makes image acquisition so easy, there is plenty of spare time for image processing.

That is an incredible image Mike (and Team). Thank you for sharing.

Thanks Roberto, much appreciated.

Hi Mike, long time no see, we used to share a telescope in New Mexico, a 12 inch Ceravolo.

Excellent result, image is beautiful, thanks for sharing!

Hi Jose,
I think that was Mike Bushell with John Kasianowicz, rather than me. Hope all is well with you. Best Mike

What an incredible result! this is indeed a beautiful image

Gorgeous. A marriage of art and science.