I started using Voyager in December 2018. I have several projects in flight, but this is one of the first where I’ve gathered “enough” data and processed it all the way through.

This object only pops between my trees, a bit above 36 degrees altitude (not Dec!), for about 3 hours per night. This data was collected over 18 nights between December and February, all with Voyager and not a single hang or crash. I never lost a sub due to Voyager (I had a USB cable problem one night but Voyager didn’t hang, it just recognized the issue and stopped gracefully after the specified number of retries).

The software:
Starkeeper.it Voyager for acquisition (+ TheSkyX for camera, PHD2 for guiding)
AstroPixelProcessor for pre-processing, cropping and light pollution elimination.
PixInsight for post-processing
PhotoShop for Selective Color to move the hue away from SHO’s greenish tinge 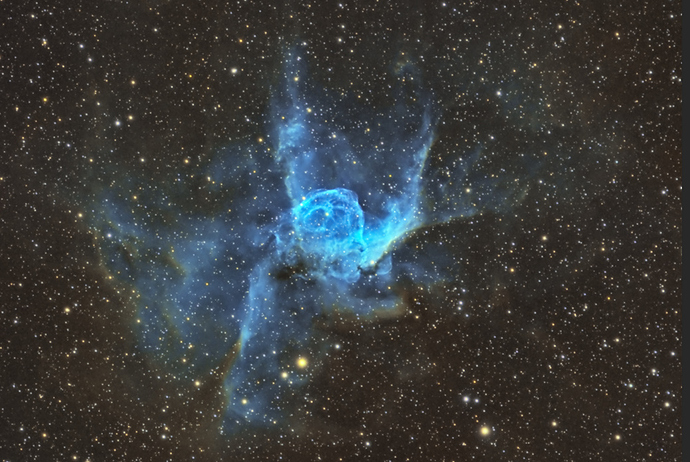 That’s really impressive, Rowland. I love it. I also meant to image that one this year but couldn’t get the weather to cooperate.

Thanks Glenn! I image every chance I get, as long as there’s at least a few clear hours forecast. Thanks to Voyager’s reliability, I haven’t missed any opportunities. Here in NC we usually get 5 to 10 decent nights a month so it really helps to have a setup that can leverage clear skies when we get them!

Do you have an Observatory, Rowland? I assume you do because of the impressive integration time you were able to put into this target.

I do not, unfortunately, and am reluctant to set up on a nightly basis due to my family and work schedule. I set up when the forecast calls for at least two consecutive clear nights but those have been few and far in between lately.

I have been working on a couple of Drag Scripts with my rig set up indoors. So far I am very impressed with Voyager and the incredible flexibility and efficiency of Drag Script.

Keep up the good work!

No observatory, but I do have a permanent installation with a concrete pier. I use a Telegizmos 365 cover and have all the computer and power stuff in a large Home Depot tub. Setup takes five minutes, literally. Bring out the computer tub, take off the Telegizmos cover. My power and USB cables are wrapped with braided sleeves so they don’t tangle. One braided cable from the scope to the tub (it has two USB and one power cable). One from the tub to the mount (power and USB). Turn it on, boot the PC, and I’m ready to go.

Before I had this semi-permanent setup, I was in the same boat as you - setting up took a fair amount of time and it conflicted with family time, so I tended to skip a number of nights. Now I image pretty much every night there’s going to be a few clear hours.

The concrete pier is ideal, but I have a second setup with an iOptron tri-pier and I leave that setup with a Telegizmos cover as well. It needs to be polar aligned every so often, but not every night unless someone bumped it.

Sounds like you have a very nice set up. What you are saying really resonates with me, Rowland. I really need a permanent or semipermanent set up to take advantage of every bit of clear sky.

By the way, thank you so much for the Voyager wiki. I have read it several times and have found it incredibly helpful as I get started with Voyager.

If your situation allows you to leave your gear out with a Telegizmos 365 cover, I highly recommend giving it a try. Even with a tripod, as long as you are on firm ground (patio or some flat stones / tiles under each leg so it doesn’t sink into the ground and mess up polar alignment), you will cut your setup time to minutes and get a lot more imaging done. A Cloudwatcher takes things to the next level, although you could also use a DragScript and just suspend for 10 minutes (or whatever) when, say, guiding fails due to star lost, which is probably clouds passing by. Then resume and try again.

I’m glad the Wiki has been helpful, I learned a lot writing it. Please let me know as you come across things it doesn’t answer. I monitor these forums and try to catch things that come up here so I can improve the Wiki.

Voyager is too good to not be more widely used. Removing the “no English doc” obstacle should help, but I think it is still not as well known so I try to mention it without being pushy, so people who are curious can give it a try.

Wonderful Rowland, really nice !
Thanks for using Voyager and for your help.

Thanks Leo, it was a lot easier getting the data with Voyager