Hi, I want to share my latest narrowband image, the Crescent nebula. This is officially the first light of my new camera, a QHY268M. So far so good, the camera is very clean and it works brilliantly with Voyager’s native QHY drivers. 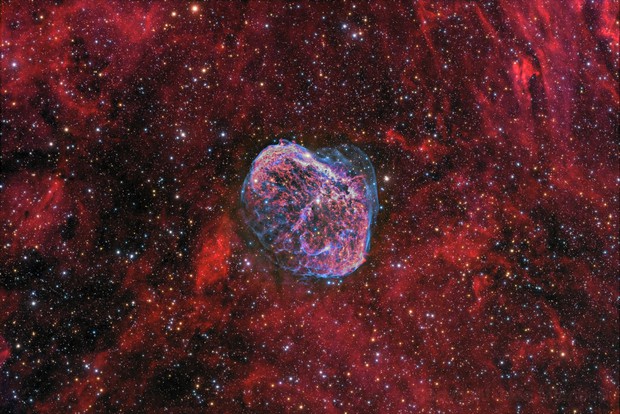 Congratulations on the first light! The 26 h exposure time was worth it, this is a very fine image!
Btw: I also like my QHY 268m very much, I’ve been using it since August

I am learning how to use it, the gain-offset-read-mode is something I am figuring out.

this is a wonderful image … another APOD on the way I hope !
Thanks for sharing and congratulation for the dream setup (for me).

gain and offset was also something new for me as a long-time CCD user. I am now at gain 26, offset 50 for LRGB and gain 56, offset 50 for narrow band filters. Gain 26 offers significantly lower readout noise, but the full well capacity is still OK.
That’s the beauty of the native driver in Voyager, gain and offset can be set for each filter and thus change automatically in the course of the night, for example, if you change from broadband filter to narrowband filter.

Thanks Leo! I love this setup it plays very well with the small pixels. It is a shame that I can only shoot narrowband from my place.

One thing I didn’t mention is how well Voyager works with the whole rig. For this image, I captured 480 individual frames and I didn’t toss a single one, every single frame was high quality. Voyager is the only software that had allowed me to achieve this keep rate of light frames, and I have extensively used the other automation solution. Very happy camper!

So far I have only used the camera on High Gain Mode, Gain 60 Offset 76. To be honest I didn’t perform any test or measurement, I simply took a look to the camera’s graphs and decided that was a good tradeoff between FW, read noise etc.

What read mode are you using?

Did you perform any test to arrive to your current settings?

I have spoken to a few users, but decided mainly on the basis of the data sheet.
Since I like to create deep LRGB shots, a good FW was important to me. At the same time I am limited with the single exposure time because the telescope is the second one on the mount and after some time a drift becomes visible. Thus, I would like to be background limited in a given time, in LRGB and narrow band.

That’s why I chose mode 0 and gain 26 for LRGB, because that’s where the drop in readout noise is. FW is still OK.
For narrowband then gain 56 to be safely background limited. The FW is somewhat worse here than in mode 1, but that was beside the point for me with narrowband - the stars are thrown away in image processing.
Theoretically, mode 1 would be conceivable for narrowband, but the mode cannot be changed in the series. So I’m sticking with mode 0.

I am looking forward to test the camera in a dark location,