NGC 7293 “The Helix Nebula” is a large planetary nebula located approximately 695 light years from Earth in the constellation Aquarius. It is the nearest bright nebula to our solar system. The nebula’s striking appearance earned it the nickname the Eye of God.

The nebula appears in the field of view as the equivalent of almost one-half the Moon’s diameter. It spans around 8 light years to the outer shells.

The Helix Nebula was created by the death of a star similar to the Sun, when the star evolved into a red giant and shed its outer layers. The star’s outer gasses, expelled into space, are lit by the remnant central core of the star, which will become a white dwarf when it cools down. There is extensive Hydrogen Alpha and Oxygen III creating the nebula.
This image is fairly unusual as it depicts multiple faint outer shells of the Nebula. 42 hours of exposure time was used in the Hydrogen Alpha channel to bring out these faint details. 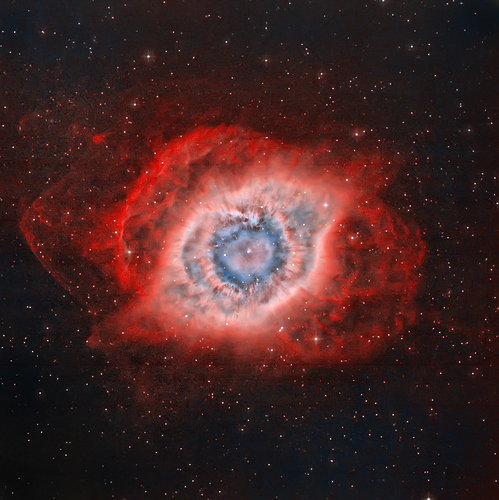 Congrats Mike, your image are at top !
Thanks for sharing with us and thanks for using Voyager.

Thanks Leo much appreciated.

WOW! No substitute for many hours under clear skies - great detail.