Not getting the mount to move to target 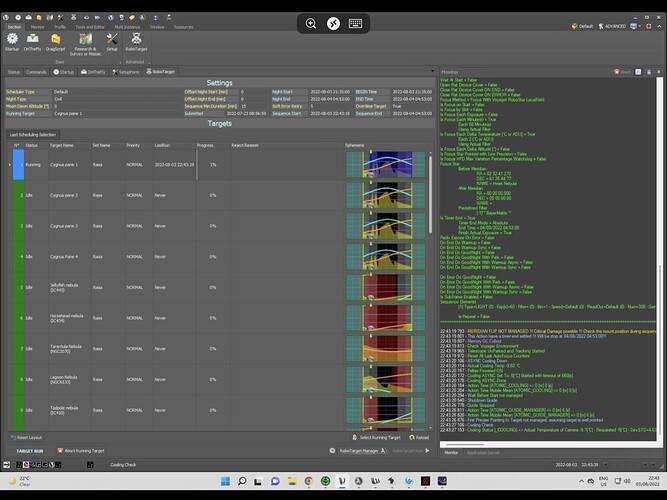 Also having issues where i try to carry out a v curve and its saying platesolving is disabled ? 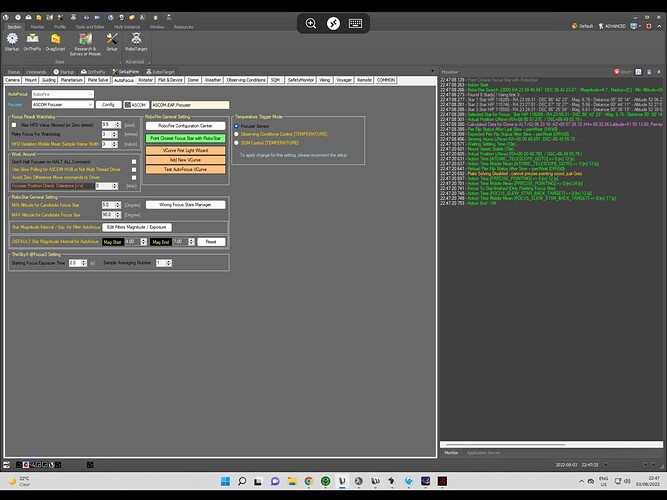 OK, one thing at a time. I can see you are using Advanced. You need to go in to the base sequence you have set up and in the “On start” tab tick the “Point target on start” otherwise Voyager assumes you have already centred your target. 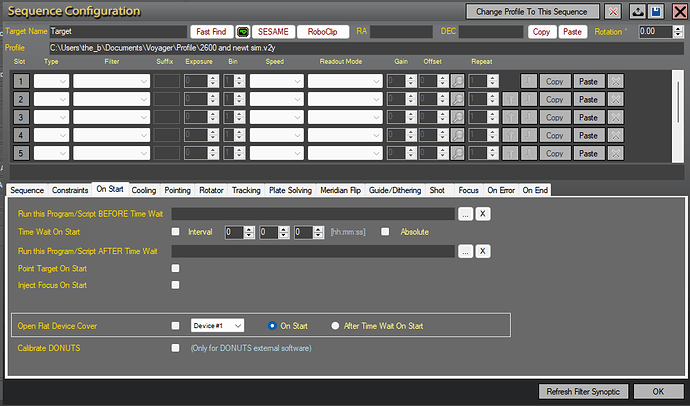 The second I would look at is the plate solving. In the plate solve tab in your second screenshot, have you configured the solver you are using there? And tested it against the sky?

Then on to carrying out a V curve, do you mean to set up focus or to actually focus during imaging? Before using focus you need to have the scope in reasonably good focus, preferably plate solving working and a plate solve and sync carried out. After that, click on the “Point closest focus star with Robo Star” button and wait for that action to finish, then run the first light wizard (For the first light wizard, don’t try to pick out and center a star yourself, use the "Point closest focus star button)

If you have already successfully run the first light wizard and you mean it is not focusing during imaging, have you set the base sequence to have Voyager manage focus? If you have not, it will not.

It does not look like you have meridian flips set up either, but one thing at a time as I wrote to start, so long as your mount is set up to stop tracking at the meridian or at least before a pier crash will happen.

Many thanks for the time to reply really appreciated.

So last night i managed to image but only after i pressed the go to target and centre. So as you mentioned that should be resolved by ticking point to target in my base sequence

With the platesolving i have managed to get it working but not for when i Auto focus.

I havnt managed to setup my initial Vcurve also as it keeps failing. I do press point to nearest star and it tracks to it but then doesnt platesolve to start. Can i ask what platesolve r you use please? I have Platesolve 2 and ASTAP for blind. I was looking at pinpoint but its another cost ha ha.

I noticed the meridian flip. I stopped imaging at midnight as i saw it wasn’t configured.

I am using Plate Solve 2 for near solves and ASTAP for blind, and occasionally ASTAP for both as there are a couple of spots in the sky that I have found PS2 just refused to solve, it would time out and go to the failover of a blind solve with ASTAP which would solve immediately! I have had three images where PS2 did that and I just go to ASTAP for both near and blind to save the time lost to waiting for PS2 to fail. But I prefer to have two different programs configured than to rely completely on one.

When you click point to nearest focus star I believe the backend needs plate solving to be configured, but it does not use it for that function (Only in the focus setup tab, for actual focus it needs to slew and plate solve as the star is centered much more precisely than for the first light wizard) Is it throwing an error when slewing to the focus star or are you having issues with it failing while the wizard is running?

If it is failing during the wizard characterising your optics it would be better for you to request support from Leonardo, which you do via the email address listed within Voyager, the forum is not used for official support.

I thought I would put this in a separate post.

For the automated flips, you need to set it up both within the mount setup tab (The “Do flip after passing meridian by” checkbox) and you need to work out a time to put in there in minutes which is the minimum time after the meridian that Voyager will carry out the flip (Some mounts like one of mine are fussy about syncs near the meridian and the plate solver after the flip MUST be west of the meridian or the sync will be rejected and re-centering fails, the flip time needs to be far enough past the meridian to be positive that the post flip plate solve will be west)

After that in the sequence you need to select “Manage” on the meridian flip tab, I normally select for it to inject a focus run after the flip, and you should tick the “Force meridian flip…” checkbox and enter a time which will have Voyager force the flip (And abort any running exposure) before you have a pier crash.

Ideally, the flip time in the mount setup will make sure if you have a mount like mine that the re-center wont fail for a rejected sync, and the “Force meridian flip” time will allow any running exposure to complete without allowing a crash. The critical thing being avoiding a pier crash! If the longest subs you shoot were 600 seconds for instance and your gear will go half an hour past the meridian without a crash, you can set the flip time to ten minutes, and the abort time to 21 so even if a 600 second sub started right before the ten minute mark, it will finish and THEN the mount would flip.

HI Paul I think I have found the issue. I am imaging with a Rasa and a One shot colour with e narrowband filter. in the sequencer I have upped the image time for plate solving. I will still reach out to Leo in any case.

Paul the help you have given is fantastic. thanks so much. I cant wait to give it a go. even without being setup anywhere near correct kinda happy with some of the subs I was getting last night 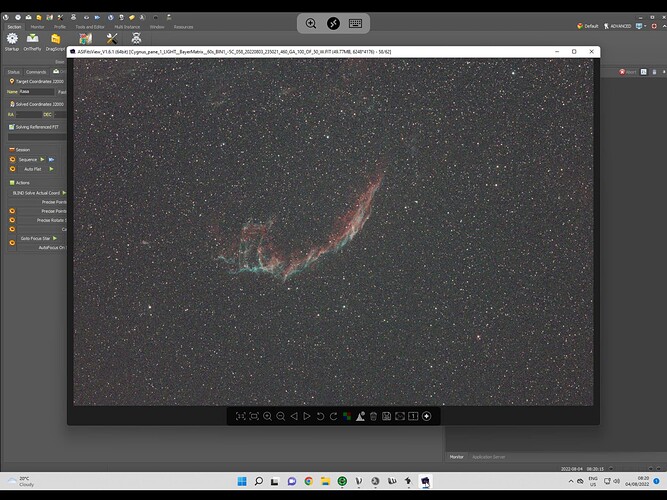 One thing the RASA should be good for, with the camera at the front of the OTA, with many mounts you should be able to image quite a long way post meridian without risk of a pier crash given how far forward a RASA usually sits to get it in balance in declination.

I understand Leo’s logic behind the setup in Voyager to be trying to maximise the time spent imaging near the meridian, to take advantage of what should be the best part of the sky.

Regards the focus, I have not tried it myself but I believe that it can be better to focus OSC cameras on BIN2 to reduce issues with the bayer matrix. Were you trying to run the focus first light with or without the filter in? If it was in, try it without. I used at once stage to use an OSC with NB filters and had to go to quite long focus exposures to get it to work, but I did not use BIN2 at that time. I have changed to a mono camera since then. I do still have the OSC but have not used it for some time.

This is really useful thanks. I have two Rigs the other being an Edge HD which will use the longer subs.

many thanks ref focus again. If I focus at Bin 2 will the focus be correct when I image in Bin 1?

Yes, binning level will not make any difference to the focus point, in a one shot colour CMOS camera, the binning is all done in software in any case.