I have written a script for unattended imaging of up to 3 targets. Whether 1, 2, or 3 sequences are “active” is determined by setting a variable called NumSeqs at the beginning of the script. The script is essentially the same for each of the sequence blocks, yet the simulator does not run as expected.

For example, setting NumSeqs to 2 should allow only the first and second sequences to run. Instead, the third sequence always runs, and this is true regardless of hitting “Next OK - F3” or “Next ERROR - F4”. I have double and triple checked the script and can find no problems.

Is this a peculiarity of the simulator, or am I doing something wrong?

Here is a screen shot of the relevant portion of my DragScript: 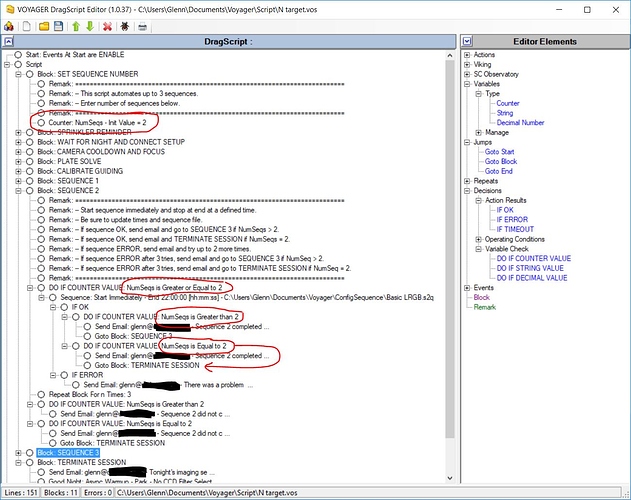 Glenn - try moving the initialization of your counter to the Script area, outside of any containing block, like this:

try to send the script to me without the mail send blocks and i test in simulator.
I introduced a lot of blocks in Voyager in the latest versions … i need to understand if there’s a bug in simulator.

Initializing the counter in the script area did not seem to make a difference.

I have attached my script with the email blocks removed. Thank you for helping!

OK! I know it works when running with Voyager (real time), maybe a simulator bug as Leo said.

Great! The code makes perfect sense to me but the simulator wasn’t running it properly. So maybe it is a simulator bug. I’m curious about what Leo will say.

Thanks so much for running my script, Rowland.

Its a simulator bug , i’ll fix as soon as possible.
Thanks for have pointed it out.

Thanks for investigating, Leo. Have a good night.

I’m working on it, I took the opportunity to make improvements to the Simulator that I had in mind. Soon a new Daily Build. 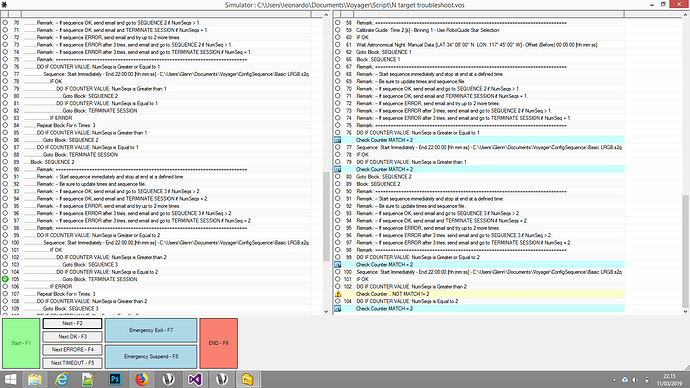 I like the improvements. The variable check is a very useful visual cue. Excellent idea.

Leo, would it be possible to show more of the message in the DragScript email actions? I have a number of messages that start the same but the last few words are different. It would be nice to see the message contents at a glance instead of having to open each one individually.

Ok … i enlarge the char number …