The imaging portion of my session yesterday ended uneventfully. I got lots of usable data.

However, when the sky flats sequence began, I started to get out-of-memory errors from my ZWO ASCOM camera driver (I have an ASI1600MM-cool). The sequence failed and the DragScript proceeded to the Good Night portion of the script. I caught this after the DragScript hand ended but before the camera had completely warmed up.

I ran a second DragScript just for dawn sky flats, which includes a camera cool-down command. For some reason, the camera continued to warm, and I could verify this by looking in the CCD status widget. Despite this, the CAMERA command widget reported “COOLED” at +9.7C (see screen shot). And at that point, Voyager began taking sky flats with an un-cooled camera. 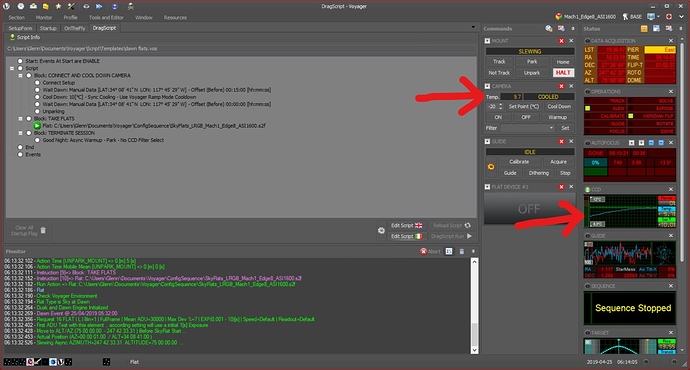 Did I approach this the wrong way, or might this be a bug?

Sorry Glenn, but i dont understand what you ask.
The camera from image result cooled at setpoint of +10°.
Data coming directly from camera and Voyager cannot mistify it … there’s a separated thread talk with the camera and is no related to the action running.

In your Dragscript there’s a cool down block to cooldown to +10°C. This match on what i can see. If you see a graph like warmup is probably because before is cooled at lower temperature.

Sorry, Leo, I could have been clearer.

I have the default cooler set point at -10°C. I was running a DragScrupt that should manage a night of imaging and then take dawn sky flats.

My concerns are that:

Doesn’t exist a default cooler set point at all … exists a default setpoint that work only at setup connection if you choose on Voyager setting to activate. If you run a sequence, a dragscript with cooling down block or warmup … each object must have internal setpoint defined (exception for warmup where setpoint is readed from general camera setting).

In the dragscript you attach the only block that do cooling is the Cool Down block and setpoint is +10°.

I dont find anything strange !

If you think to find a bug please use support mail and send dragcript, complete log file and timing of problem. If operation is cross midnight send log day before and after.

Ok, I see what you mean and I feel stupid.

I must not have entered the minus sign when I created the DragScript. I’m sure correcting the set point will fix the problem.

Thanks for your help (and patience!).

Of nothing Gleen … sorry for you.