Sombrero, Trifid and others

I recently acquired a 10" F4 newtonian which has been through the hands of several of my friends. After a couple of weeks buying equipment and teaching myself to properly collimate a fast newtonian I was lucky to get two nights in a row of clear sky around the new moon. The first night was going to be a little windy so I mounted my SVX80T refractor rather than a great big newtonian, but last night was clear and still, so it was testing time.

The image of the Sombrero galaxy is the best 55 out of about 65 X 300 second subs, chosen subjectively based on throwing out any subs with out of round stars, and then some more based on those where the star HFD was the largest, indicating poorer seeing. I wanted to keep to prime imaging time where the Sombrero was above 45 degrees elevation so I generated a script which shot the Sombrero until it went below 45 degrees, then changed to the Trifid nebula, on which I got 18 good subs, seeing had deteriorated a little by then as well. Via the script, Voyager seamlessly managed the two targets, and between the two of them, effectively three meridian flips (Once while shooting the Sombrero, back to the east to go to the Trifid, then one more when the Trifid passed the meridian) and then shot dawn sky flats before parking and warming. 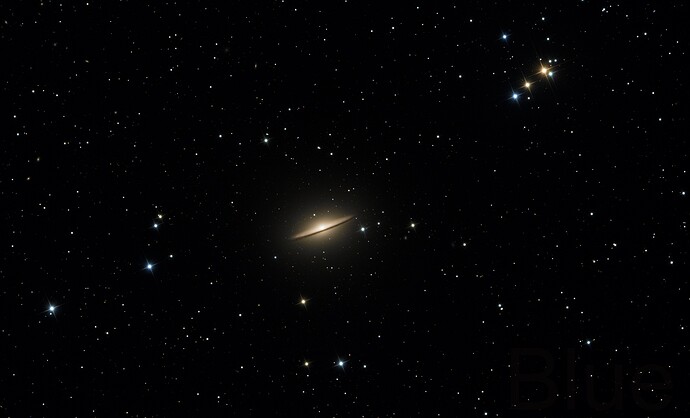 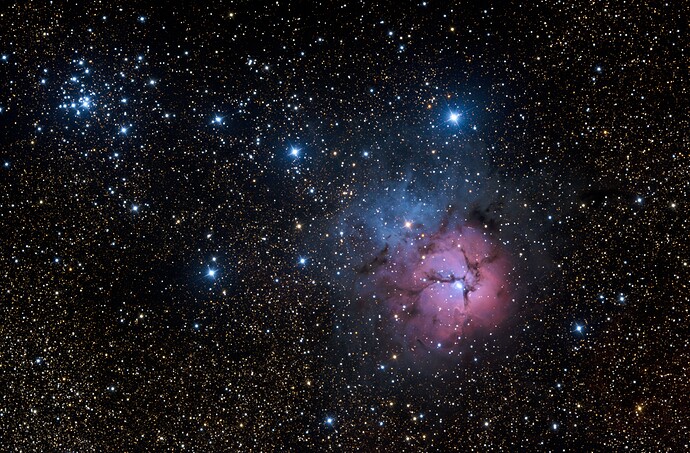 Excellent shots and lovely wide fields! Glad you are enjoying that scope and making best use of it

Really nice images … thanks for using Voyager.
M104 … I love you image !

All the best
leonardo

Thanks to you both. I am really happy with how M104 turned out, I have wanted to do it justice for a while but my previous imaging scope for that scale was a standard C925 SCT pressed in to imaging service and while it is a really nice scope visually it just did not produce images as sharp as I wanted, this image shot in one night is much better than I ever got out of the SCT over multiple nights.

The Trifid is very much an initial image, I have months yet to accumulate more subs to improve it, but M104 is obviously getting later in its season.

Voyager (Which I have been using for about 18 months now) has brought a lot more flexibility and reliability to my imaging runs, so I am very happy to have made the change to it, and even for a basic user like myself, useful new functions keep being added, the manual camera rotation aid is a great example and I use it almost every imaging night.

Really nice pictures, Blue! Your stars look great across the field and the details are excellent.

I also have an SVX80T and recently purchased a 10-inch f/4 newt that I am setting up for imaging. What camera are you using, and how do you like imaging with the newt? Any tips on setting up the Paracorr? (I bought one of those, too.)

I have the older Paracorr so I am not sure if any setup tips I can give will be very useful, but from my reading it requires 55mm + - 4mm spacing, so it is pretty forgiving. Mine came with an adapter from the televue specific thread to M54 male and that used up maybe 1mm of spacing, so with my current setup which has 55mm spacing and an M54 female thread on the telescope end it was as simple as screwing the paracorr on to the camera and putting it in the focuser.

The real trick at F4 of course is collimation. If you have not got an autocollimator as well as a laser I would suggest getting one quick smart. The laser can align tilt of both mirrors to the focuser axis, but rotation of the secondary is really hard to resolve with just a laser, barlowed or not. I spent quite some time trying to sort the rotation with a sight tube and got it pretty close, but the autocollimator immediately showed me that it was still not right.

Thanks. Well, you must have your collimation dialed in because your stars look perfect.

I hopefully will have time to set up my scope in the next few days. I got a Primaluce Lab Esatto 2" focuser and Paracorr 2 for my Sky-Watcher Quattro 250P newt. I also bought collimation knobs and stiffer springs for the mirror cell. I went with Farpoint 2" collimation tools, including an autocollimator. The only lacking item is a sight tube, which will arrive today—I got a Telecat XL.

Thanks for the advice. Congrats again on your images.

From my experience so far.

The sight tube is only really needed initially to get the rotation of the mirror right and ensure it is under the focuser properly, then the laser for initial setup of tilt of both mirrors, then the most time with the autocollimator. Just if you find you cant see all the reflections you should, pop the laser back in. It is easy to make a wrong tweak and have some of the reflections go out of view. I found the best thing about the autocollimator was that it makes minor rotation of the secondary obvious. I chased that around in circles for a night then bought the autocollimator and fixed it in minutes.

I can only echo - jaw-dropping, very good quality. Well done.

I thought I would change the name of this thread and add more images here rather than starting new threads. Last weekend I went to a friends house to help diagnose some equipment issue he was having, and try out Voyager against his equipment. I figured I might as well take one of my setups (I have two) so I shot HA and Oiii on Ara. Usually this area is imaged in a particular orientation and presented as the “Fighting dragons of Ara” but my friend suggested a different orientation which might be called the “Erupting Volcano” instead.

With a few extra processing steps to debayer and extract HA and Oiii from the one shot colour subs, and save them as mono HA and Oiii to integrate, I enlisted my friends processing knowhow (I am moving from OSC to mono imaging, but my mono camera has not arrived yet) and this bicolour image is the outcome, 29 X 600 second HA subs and 20 of Oiii, all managed by Voyager including dawn flats. Shot with a ZWO ASI2600MC Pro and Stellarvue SVX80T scope. 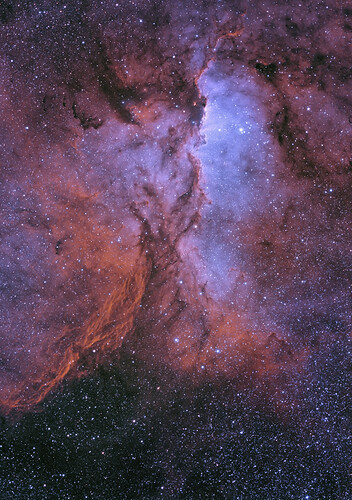 Another good night allowed me to shoot RGB data on Ara with the OSC camera and to shoot new and less noisy Oiii from my much darker home site, so I had a go at an RGB_HA-Oiii image on the same target. The RGB stars look much nicer. 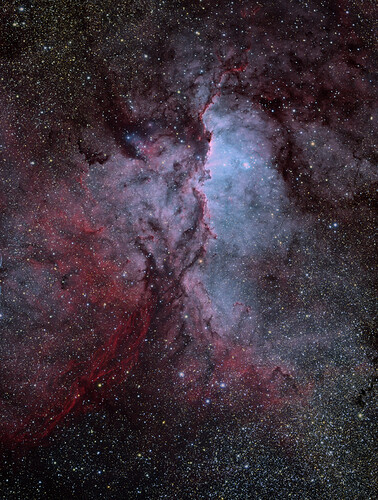 I actually quite enjoy the straight RGB version as well, I don’t think I have ever seen an RGB Ara as everyone tends to do the HA-Oiii-Sii narrowband “Fighting dragons” image. I also spotted a tiny little planetary nebula in the RGB that is not visible in the HA or Oiii. Identified after a little research as ESO 226-15.

RGB image of Ara, ESO 226-15 is in the top left corner slightly left of the triangle of bright stars. 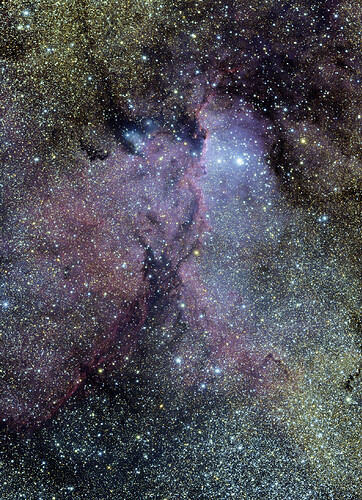 ESO 226-15 is the tiny pinkish smudge three quarters left and about mid height of this crop. 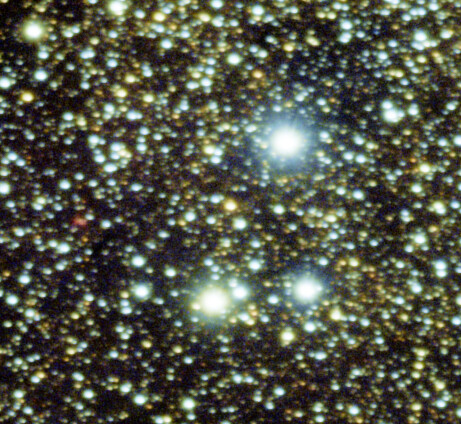 A new image and my first RGB-HA-Oiii with my new ASI2600MM mono camera. Previously I was shooting narrowband data with a one shot colour camera The ASI2600MC) and I actually shot the same HA data twice on this target so I could make a comparison and see how the OSC performed compared to a dedicated mono camera. Surprisingly well as it turns out but there is no doubt which version of the data was from which camera.

The target is SH2-24, a relatively dim emission area near M8, the processing is 36 X 120 second subs each or R-G-B, 18 X 1200 second HA subs and 19 X 1200 second Oiii. Integrated in Astro Pixel processor and post processing to generate the RGB image and blend in the NB data in Photoshop. Shot with Voyager over three nights.

For interests sake, here is the astrobin link to an animated gif demonstrating the difference between interpolated HA data from the OSC camera and HA filter and native HA with the mono.
https://www.astrobin.com/full/dsafar/0/?mod=&real= 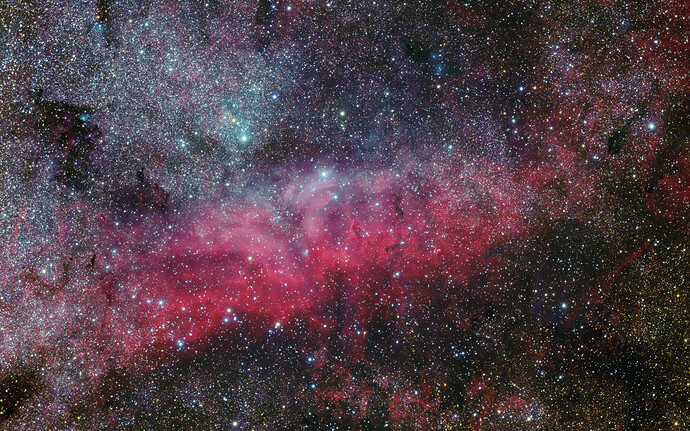 Two more images, shot in one night (The only clear night I have had for weeks) while re-commissioning my 10"F4 Newtonian and ASI2600MC Pro camera. The first is M83 with 50 X 120 second exposures and the second, NGC6744 with 55 X 300 second exposures. 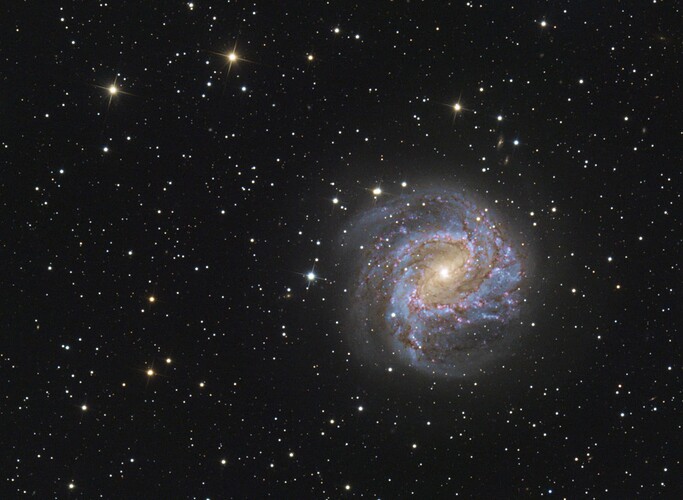 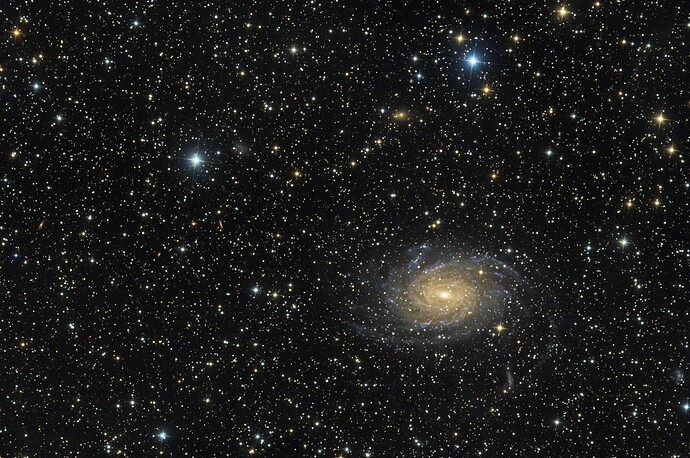 Thanks Leonardo and Glenn.

The 10"F4 is such a nice scope to image with that it leaves me with a real dilemma about which of my scopes to mount the OSC and which the mono camera on. If I get a nice bonus at work next year I could see a second ASI2600MM in my future to replace the ASI2600MC (Which is what these two were shot with)

That is indeed a nice scope. I have been having a great time imaging with my 10 inch F/4 for the last couple of months. There are so many suitable targets. Happy hunting.

Another image shot with Voyager, the Helix nebula. 92 X 600 second HA, 96 X 600 second Oiii and 22 X 300 second each of LRGB. Automated with Voyager over around ten nights between early August and this week, including automated dawn and dusk flats each night for the full LRGB-HA-Oiii set. Stacked and the LRGB base image created in Astro Pixel Processor with layering of the Oiii and HA data and post processing in Photoshop.

This one was a lot of work!! 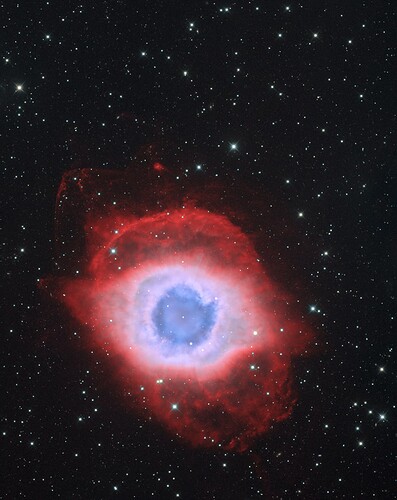