I am working on a mosaic of Rho Ophiuchi and in one of my panels I am getting a strange diffraction spike sort of artefact which doesn’t emanate from a star. This is just a single luminance test frame but it appears for all filters. Can’t work out what is causing it. Anyone seen anything like this before? I am using an 8” F4 Newt. 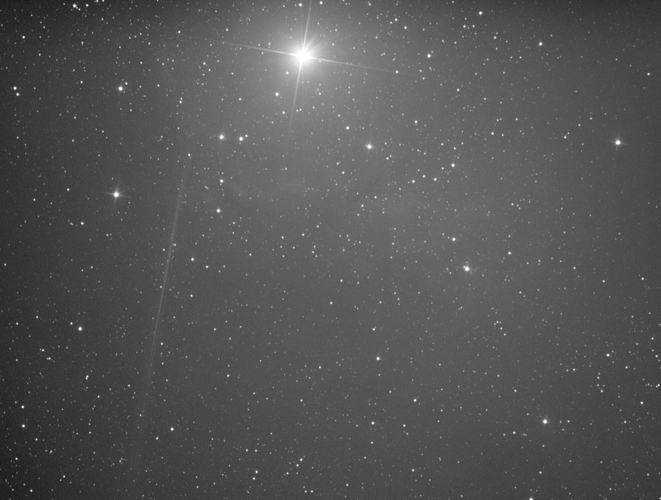 The line is exactly parallel to the diffraction spikes that you have with the large star in the field. It looks like some sort of internal reflection maybe.

I think you might be right. Initially I thought it was from a star in an adjacent panel but it doesn’t match up as you can see from this test luminance mosaic. My local astronomy group think it is Comet LeighB/2020!

I’m no expert with Newtonians, but I agree it is likely an internal artifact. Maybe from a mirror clip or the draw tube protruding into the light path?

Thanks Glenn. Could be. Must be just a particular set of circumstances lining up for this image. I think I might do a bit of cropping!

I am doing a Rho mosaic at the moment, my money would actually be on a reflection associated with Antares, I am having loads of fun working out ways to tame it on a number of panels in mine.

In the case of mine it is showing up skipping a panel rather than being in the adjacent panel. I was lucky as it showed up as a striping effect not a single spike and when I assembled a test I realised that the stripes all radiated from Antares. This is a heavily overstretched example, Antares is over a full panel away from here.

Paul, I think you are on the money. If you project my “spike” it pretty much aligns with Antares, skipping over around one and a half panels. Why that happens I have no idea! Interesting that you are experiencing a similar effect. How have you overcome this? I have tried moving my mosaic slightly and also rotating the camera but the spike just moves or rotates relatively. I checked out your post and your image looks amazing so far. I noticed you mentioned the southern winter - are you in Australia?

For the moment I have been avoiding the two panels impacted by the reflection, with a small amount of luck if I move either closer to or further from Antares by a marginal amount it should resolve it, it might mean my last two panels becomes four panels. Even if one panel over that area still has it, it should integrate out if I get enough subs centred differently which do not show the reflection. I have one panel showing a spike similar to yours from a star just out of frame and I integrated it away by putting an extra frame over the star causing it and integrating the three resulting panels as a mosaic, so there are 140 subs not showing the spike and 70 that do, so it is integrated out as an outlier.

Yes, I am in Australia, the winter weather has been dire for the last few months, I was hoping to have this project wrapped up by now as I have a new camera coming (ASI2600) and I will be sorely tempted to change cameras as soon as I have it.

That’s a smart solution Paul. Sounds like you are more advanced at processing than I am. Good luck with finishing the mosaic and the new camera. Look forward to seeing the result.

I know what you mean about the weather. I am in Tasmania and there haven’t been many clear nights of late.

I would try shooting another panel nearby, close enough to be used in the mosaic but far enough offset to hopefully move the spike significantly and help with integrating it out, it might take a couple of panels to do it though as it looks like it extends across most of a panel.

Thanks Paul. I will experiment with that. Looks like there are a few clear nights coming up, but too much moonlight for LRGB, so might be a good chance to try some offset frames and see if I can get that to work.

Even if you can just keep moving around enough to keep the spikes in each frame from overlapping it should help to integrate them out, being a thin spike and well away from Antares itself, extreme dithering might even be enough to help. What software are you using for stacking? I use Astro Pixel Processor.

I am using Pixinsight. At the moment I have no where near enough frames. The test mosaic has 5 luminance per panel. I have about the same in the red filter and that’s it. A long way to go! I will try taking some frames to the left and just overlapping the spike. Hopefully the spike won’t appear in these. If that works I can take heaps of those and integrate as you suggest.

I never got my head around Pixinsight, APP is very effective and easy to use so I never tried it.