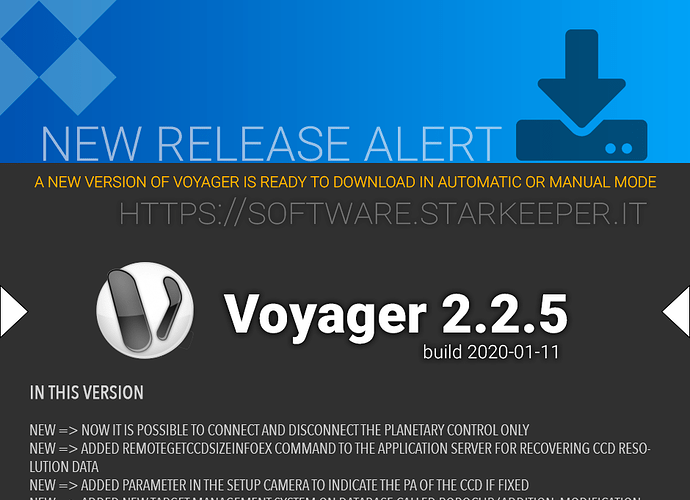 In this version:
NEW => Now it is possible to connect and disconnect the planetary control only
NEW => Added RemoteGetCCDSizeInfoEx command to the Application Server for recovering CCD resolution data
NEW => Added parameter in the setup camera to indicate the PA of the CCD if fixed
NEW => Added new Target management system on Database called RoboClip (addition, modification, elimination, external import) for quick configuration of Voyager shooting and massive import
NEW => Added RoboClip as a Target selection method for pointing
NEW => Added RoboClip as a Target selection method in the Sequence editor
NEW => Added RoboClip as a Target selection method in the Research and Survey Sequence editor for each Survey staff
NEW => Added RoboClip as a Target selection method in the DragScript editor
NEW => Added RoboClip as Target selection method in the Custom Sequence editor
NEW => In every configuration of the DragScript blocks that uses RA / DEC coordinates, the possibility of managing the RoboClip has been added
NEW => Target import into RoboClip from CSV file in Voyager Research & Survey format
NEW => Target import into RoboClip from CSV file in Telescopius Observations / Search List format
NEW => Target Import into RoboClip from Cipboard in Panels format (Target and Mosaics) of Telescopius
NEW => Target import into RoboClip from Cipboard in TheSkyx Mosaic Grid format
NEW => Target Import into RoboClip from CDCC files in the Du Ciel Mosaic format
NEW => Added RoboClip management commands to the Application Server
NEW => Through RoboClip it is now possible to search the Planetarium connected to Voyager and SESAME online in every single block of DragScript (where provided)
NEW => Added copy and paste commands of the goto coordinates and plate solving from FIT, the keys also allow the transfer of information in RoboClip
NEW => Added Copy and Paste commands coordinated to the Sequence configurator
NEW => Introduced version table inside the DB at the RoboClip
NEW => Updated ASI Native Driver SDK to V1.14.1119 with the new cameras (ASI6200 ASI2600 ASI533)
NEW => Added new ROBOTARGET block for the Advanced version of Voyager
NEW => Added Plate Solving control connection status in the Application Server’s ControlData event
NEW => Added new import of files in Astroplanner format for Voyager (in the Voyager wiki link to the example format)
NEW => DASHBOARD - Virtual Field of View (Fov) Panel
NEW => DASHBOARD - Roboclip Manager Integration
NEW => DASHBOARD - Plate/Blind Solving functions with and without Sync in Mount Panel (collapsable)
NEW => DASHBOARD - Error value in Guide panel
NEW => DASHBOARD - Send PlateSolve Data to Virtual FoV
MOD => Increased the number of digital inputs that can be managed for I / O Cards from 8 to 16 via Viking
MOD => For the Arduino Flat Device the timeout for switching the lights on and off has been changed from 3s to 20s for devices with a high number of LED lights
MOD => Modified Application Server ControlData Event to have RA and DEC mount data also in J2000 format
MOD => Simbad has recently deactivated SQL search, Voyager has switched to online research on SESAME which exploits even more contemporary research sources
MOD => Modified file sharing permissions to mitigate CFITSIO error File cannot be read in TSX Image Link Solving, check that the autosave is not activated in the TSX settings
MOD => If you select TheSkyX as a mount control, the parking has now been moved from Thread to a separate Process to avoid Dead Lock DCOM in the event of TheSkyX crash, the parking time limit is the one that can already be set in Voyager
BUG => In the autofocus at the start of the sequence (if selected) the default filter was used also using the flag of use of the current filter
BUG => Removed bug introduced in the Custom version of Voyager in the Remote Shutter Action following changes to the Application Server architecture
BUG => Bugs introduced in the Viking Client connection in version 2.2.4d, Viking no longer connected
BUG => A failure to enter coordinates in J2000 format was reported if a goto was made from OnTheFly in the Goto box after a target selection from the RoboClip
BUG => Removed Bug on response to Application Server RemoteGetCCDSizeInfoEx command, the DX size was always sent also for the DY
BUG => The RemotePrecisePointTarget command of the Application Server in numeric mode did not convert the RA received into JNow
BUG => DASHBOARD - Time indication for Log and ImageStats Panels

Downloading soon, impressive job. Just a curiosity francesco, did you develop the virtual fov with mosaics as last goal?

It seems to be an extremely powerful tool

Hi Alessandro, thanks for your kind words. It isn’t a priority, but we don’t exclude to implement an internal routine for mosaic planning directly into Virtual FoV in future.
In the meantime you can use Telescopius, as shown by Leo in the dedicated video, and import with a single click into RoboClip, it works very well.

Wow, guys, truly amazing work! Thank you so much.

Mosaic Maker would be more marketing than a true necessity, but it would mean to work everything inside the dashboard instad relying to external managing tools. I have to do some tests but the 6 panel i’ve made to test previous relase, doesn’t send me in the same place in voyager. Tomorrow i will do some more test to see if it is my fault, do not worry (yet

Back in theme… the dashboard now is outstanding. it is appealing, fast, reliable, complete…

Congratulation to you and leo, your effort is simply amazing!

Can you explain well exactly what you mean? What’s the problems ? You have some screenshot about ? Which release you refer ?

Been going through the ROBOCLIP database I built using Telescopius and other tools and tweaking some of the framing for the targets. Love it so far!

I can’t wait to see this combined w/ ROBOTARGET in Advanced. What’s the timeline for Advanced looking like these days? It is coming soon!?

What did I do wrong 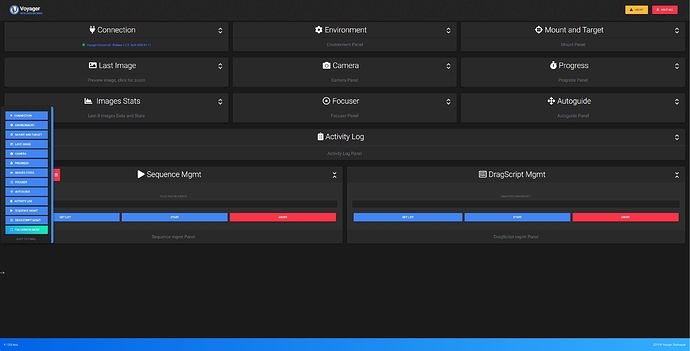 Nothing wrong. You’re running the 1.06. Try to clear browser’s cache, it happened also to me to log 1.07 into localhost and 1.08 from remote

Tried clearing the cache/browsing history (since the beginning) but no change?

You are running the 1.0.6 version of the dashboard. Press CTRL+F5 on keyboard to force reloading the last page. Before install the 2.2.5 version of Voyager.

If you continue to not see the Virtual FOV mean you not have internet connection running.
If you think is a bug please open a ticket to our support mail we can connect togheter from remote and fix for you.

Many thanks for all your efforts with 2.2.5 – this program really is starting to shine!

Just to say, the new AstroPlanner import worked very well. I now have my complete target database with my Notes in RoboClip and will be Grouping them by Calendar Month (RA) to aid selection.

Thank you so much Allan, really appreciated your words.

We hope to get out a first release for finish January.

Please test also the new Virtual FOV , this is a news in the panorama of Automation Software like the Dashboard.

I’m very impressed with the Virtual FOV and its linkage to Voyager/RoboClip. It seems to work really well. I look forward to trying it out when the weather clears. Thanks for all your hard work on Voyager and the Dashboard.

i attempted to do a mosaic with previous relase as shown here in picture, but when imported into roboclip 1.08 was shifted as in picture 2. After some test the most pertinent possibility was that telescopius kept full frame even if i had set a panasonic MN34230 sensor. I wasn’t able to reproduce the strange behaviour… it was too wired to be true! 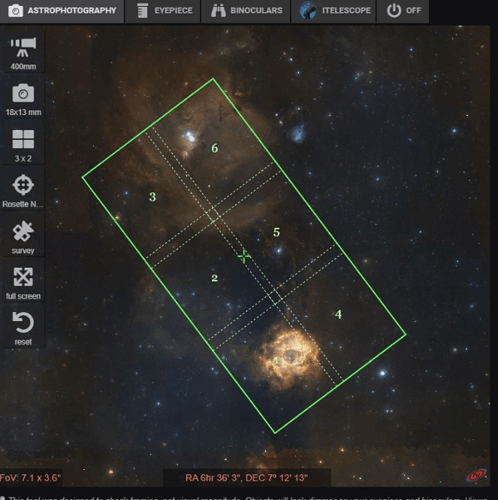 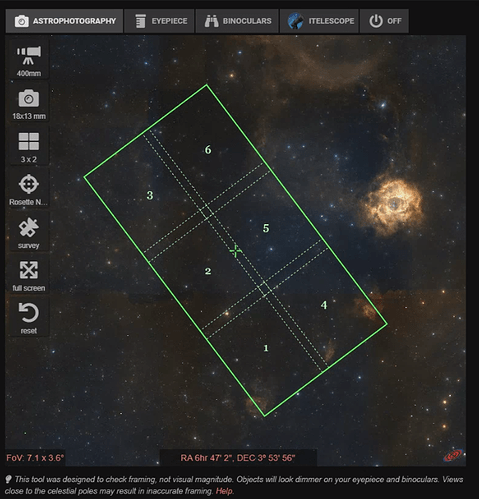 I think you must revert the question to the Telescopius developer, RoboClip can only import the coords you have in the clipboard so cannot introduce an error or send coords to Telescopius.

@Francescodb will work on focus part in the next weeks.

Allan, would it be possible to share a screen shot of your Astroplanner export settings?
Nigel