Since I finished upgrading my dome encoder, the nightly robotic operation of the observatory under Voyager control has been phenomenal - I have a 14" OTA with a slit not much wider than that, and the dome-telescope pointing has been spot on all night, before and after meridian flip. It’s a glorious thing to watch…

I have a 6" apo, and the hardware for side-by-side mounting of the OTAs, which I used to do in my old roll-off-roof observatory. But I’ve not tried this in the dome yet.

My question is: does the GEM Axis Offset parameter in Voyager allow to account for the effects of side-by-side setups? I saw how that setting was used to adjust he dome-OTA relationship for a single OTA - as the Voyager manual advises, I used trial and error to dial that in and it works beautifully. But with a side-by-side arrangement with two relatively large OTA’s like this, neither 'scope sits directly over the RA-Dec axis intersection and there are now components of offset in two directions. 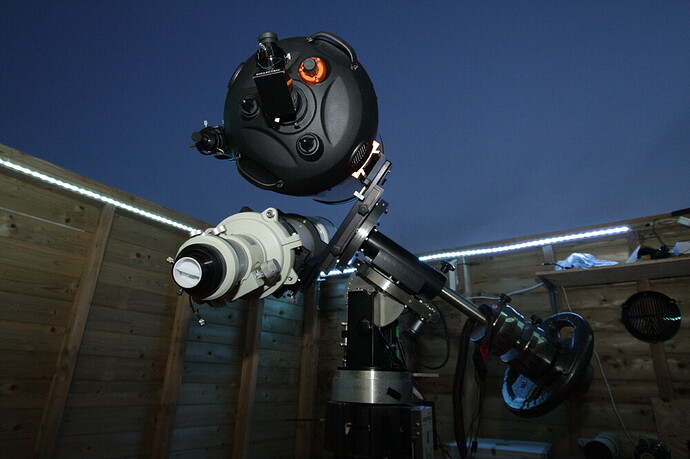 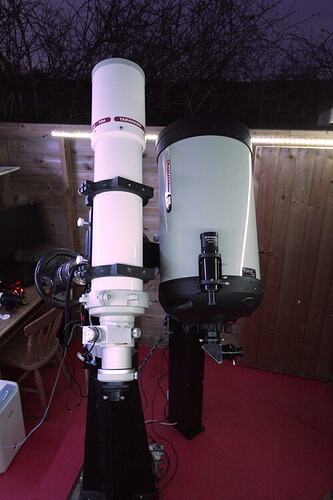 I don’t intend to image simultaneously - only one 'scope will be used at a time. But I need to find a way of accounting for that separation of OTAs, because the dome slit position is significantly different for the two instruments. I assume I’d save 2 profiles with different dome settings in Voyager and select appropriately. If I understand correctly, Azimuth Offset won’t help here because that’s a constant offset irrespective of 'scope position. Whereas in the situation I describe, the correction will vary according to pointing location.

I hope that makes sense. I guess I could “try it and see”, but it’s a beast of a mounting exercise, so I wanted to check first to see if this is possible in Voyager. If not, I’ll stick to one OTA at a time!

Azimut offset and GEM axis offset cannot help you directly in this case, nothing else parameter can help. What can help is the size of dome aperture on the sky and take the scope more closest possible and you have a lot of distance to reduce.

But I must to say that during rotation on the AR what is really important is the GEM Axis offset, in your case is fixed for the 2 telescope so difference is only a problem when the 2 scopes are palallel to the floor, but, in this case the slit opening angle is orthogonal and you have the maximum aperture possible. So all must work with just a trial and error.

With 2 profile you can try to using the Azimuth offset to gain some space.

Thanks Leonardo, that’s useful. I think in this case it’s worth having a go to see if I can make this work - nothing is lost if not.

I’m really being lazy - it’s a case of trying to avoid mounting and unmounting these ~25kg OTAs when I want to change instrument!

Hi NigeB
Thats more or less where I am at too. I have an EQ8 carrying a NA140 and RC12 managed by voyager.
The dome slot tracking has been fine but then I tend to attend for a while and fettle before I leave it alone rather than having spent time getting dead reckoning reliable all the time which needs a reliable dome pointing mechanism underneath it all. The azimuth offset setting seemed to cause me problems with the driver and ended up causing oscillations but it may have been caused elsewhere too.
I model the required location in my head as the centre of the circle enveloping both OTAs which I require the central axis to lie on the centre line.