Hello.
Perhaps it’s a silly question, but I’m doubting about the best approach to rotator angle.
First of all, I don’t want the rotator moving after Meridiam flip, as if it turns 180º I should need different Flats for pre and post meridian images.

Using Sky-PA
When I define a sequence, or in a mosaic, I define usually the rotation angle in a PRE meridian position.
For example 30º.
After the meridian flip, if I uncheck “Maintain the object orientation”, Voyager knows I don’t want to move the rotator, and the solved Sky-PA should be 210º without moving the rotator.
As expected, the image result should be 180º flipped, but the flats should be the same.

But what happens If I begin the sequence and the object first image is taken AFTER the Meridian flip?
For example, in a second night, I begin later and the object has already passed the Meridian…
Is there a system Flag that makes voyager know that instead of 30º it must look for 210º?
Or is it going to Sky-PA 30º?? If it goes to 30º AFTER the Meridian, the rotator will turn 180º and the flats will be different.

If I use Rotator-PA
The question is the same.

If for the explained Sky-PA 30º my Rotator-PA is, for example, 45º, and I begin BEFORE the Meridian flip, there is no problem.
Voyager calculates the Off-set (15º) and for a solved Sky-PA of 30º, the Rotator-PA should be 45º.
After the meridian flip, I think it calculates 210-180, and doesn’t move the rotator.

But what happens if I begin the session AFTER the Meridian flip? It will try to maintain the off-set and will go to 30º after the Meridian instead of going to 210º!. So it will turn the rotator PA to 30º.

Do you know what I mean?
It’s very difficult to explain.

What I mean is that perhaps it should be necessary to add two different angles into one sequence: Pre o post meridian. Or making a convention: The angle used is always Pre-meridian (if you want to forget about checking if the sequence is OK, without checking the object position).

If not, the sequence needs to be different if you begin it before or after the meridian because of the angle.

I’ll investigate the behaviour when I have no clouds and time!
Thank you

Sky PA solve on the sky, same sky PA after meridian mean to rotate 180° (not Sky PA value but the rotator and this is automatically done with solve). If you dont ask to mantain same orientation to not rotate the rotator 180° will be added to SKY PA requested. Starting before or after is managed by sequence.

Rotator PA doesnt look on the solved PA so just ask to driver to position at angle requested. If you ask to mantain same orientation a 180° flip will be done. Starting before or after is managed by sequence.

All is tested and in use since months , but if you found something not work let we know.
Before try to understand if you need to reverse the rotator rotation (this depends on your telescope type).

I tried to read what you have wrote but I read some things not correct on how works for you the Sky PA and Rotator PA and I dont understand if you have a problem.

In case of problem with evidence use support.

Sorry for the confusion.
Yes, I had some unexpected behaviour (images not flipped, and what is more strange, an angle that was no X or X+180).

Perhaps is related to my Lunatico Seletek Rotator: I fixed some limits in order not having problems with cables (between 110º and 250º is a forbidden area).

Anyway, I’ll try to contact you through Support. I have the logs files, the images taken etc.

In the meantime, if you want, you may close this threat.
Thank you
Fernando

If you have limit in you rotator … you cannot use the Sky PA without know exactly relation between Sky PA and your Rotator PA. Voyager cannot have (and will not have) a limit concept so if ask rotator to go on a defined SKY PA the rotator must go or Voyager will receive an error. With Rotator PA you are free to avoid limit before start.

Having a rotator and such big limits is something really unusual.

Hi Leonardo.
I’m not sure if the standard rotator behaviour avoid turning and turning without limitation in one sense.

I don’t want the camera and filter wheel cables turning in circles like a solenoid. 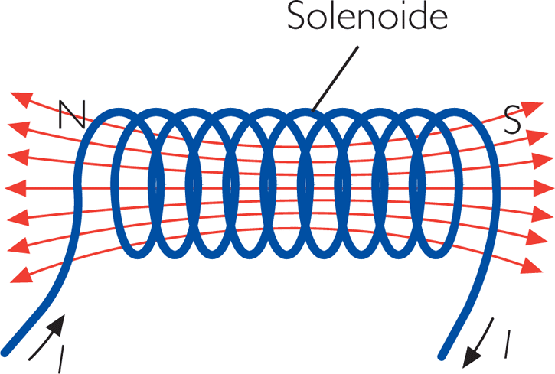 (Sorry for the example image, but it’s for illustrating my thoughts).

I can not check it now because it’s a remote observatory at a second home, but I’ll check it as soon as I can.

That’s why I set the limits. For astronomy pictures, with 270º to 90º (180º amplitude), you got all the possible relative angles of an object.

Anyway, with Voyager Rotator PA, all is OK. It’s perfect. I only have to sync once the Rotator PA and the real Sky PA, and always use the Rotator PA. (I konw that really you don’t need to sync, just only knowing the offset between them, but It’s easier if the offset is near 0).

This is something to ask to the driver developer of your rotator (not in charge to Voyager). I absolutely hope they have write things in the right way. Usually all rotators manage thing in way to not twist the cable.

Hi Leo and Fernando,
I confirm my Gemini Integra RF85 rotator driver manages rotation turning sense to avoid cable issue, I dunno other products, but I think it is imperative feature in any rotator drivers.
Of course everything works well with SkyPA in my setup, my2cents.
Best
Francesco

Pegasus Falcon Rotator also manages the rotation direction and has a limit sensor to control direction of and limit of turn in either direction.

Yes our driver won’t twist your cables - the rotation will never cross the “forbidden zone”.
If, however, you have defined a wide forbidden zone, (as you said, between 110º and 250º is a forbidden area), then any goto to that zone won’t complete. it will go to the allowed position closer to destination.

Hope this helps explain your situation… ?

Thank for you answer Jaime … and welcome.

I should have come earlier…

But what happens If I begin the sequence and the object first image is taken AFTER the Meridian flip?
For example, in a second night, I begin later and the object has already passed the Meridian…
Is there a system Flag that makes voyager know that instead of 30º it must look for 210º?
Or is it going to Sky-PA 30º?? If it goes to 30º AFTER the Meridian, the rotator will turn 180º and the flats will be different.

Sorry to dig up the old post. I’d like to follow up on this discussion. I think I understand OP’s point and I may have a need to tell Voyager to treat Xdeg & 180+Xdeg the same. Let me know if what I said below makes sense, or if there is a solution.

I am on my 3rd Moonlite Nitecrawler, and I did a bad job on cable arrangement; therefore I have a “dead zone” of from 250-350deg according to rotator position (Rotator PA, from driver). This is already taking rotation angle into consideration; it won’t rotate only in one direction, but still due to short cable I can’t reach there.

I have my rotator PA aligned to SkyPA already (via manual sync). I know I can only specify to use Rotator PA and avoid the dead zone, but I like to use SkyPA so it has a closed-loop rotate (plate solve-sync-rotate).

Say if I create the Roboclip of a target at 90deg, and enable “rotator management” in Sequence setup, choose “using SkyPA”, and uncheck “maintain same angle after flip”. Say my Rotator driver thinks it’s at 80deg before sequence starts.

If I start before meridian flip, all is fine; it plate solve and tell the rotator to rotate; Rotator PA is already synced to skyPA, so it will start ~80deg and go to ~90deg according to rotator driver as well.

But if I start post meridian, the first plate-solve will probably say my SkyPA is 260deg, and it will ask the rotator to rotate -170deg. The actual physical angle of rotator will now be 280deg from rotator driver’s view, and I am in trouble.

So I wonder: is it possible to tell Voyager: “X & 180+X is actually the same”, and ask it to rotate the shortest route between the two? In my example the first plate-solve will tell that my SkyPA is either 80 or 260deg; since my target is 90, I just need to rotate +10deg from where I am. After that rotation the platesolve will say I am at either 89.5 or 269.5deg, again it checks for the shortest route to 90deg…

I am probably making it a bit more complicated, but I doubt if I am the only one having dead-zone issue. I hope this is a feasible implementation. Let me know if this makes sense at all.

Same SkyPA means to have the object at same orientation in the image before and after the meridian. If you starting after meridian the sequence Voyager will rotate to the requested Sky PA. SO I need to check code to understand how to introduce your request and the name of flag.

But you need to test for me because at now I dont have a rotator for testing it on the sky.

Thanks Leonardo! I appreciate you considering it. Yeah I can beta test for you, no problem.

If you starting after meridian the sequence Voyager will rotate to the requested Sky PA.

Yeah this is where I would run into problem… I wish it allows both X and 180+X as “requested sky PA”.

To answer correctly, I performed extensive tests because I had an idea that things were already as requested but I was not sure.
I even created a new manual plate solving control for the simulation that opens a window where you can directly write the solving results.

Attached is the image of the precise pointing with Sky PA of your case. 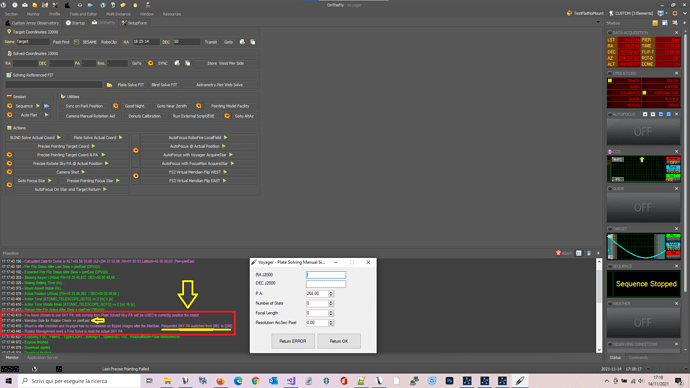 As you can see, if the image orientation maintenance flag is not checked, if the mount is after the meridian, the required angle is offset by 180 ° of the PA which means the rotator remains stationary. This is exactly what you are asking for.

So there are no changes to introduce in Voyager you can already work like this.

I add this description in the wiki for everyone:
https://wiki.starkeeper.it/index.php/Sequence_Configuration#Rotator_Tab

Thanks. I think this is basically what I need. I’ll give it a try!

I too have had difficulty with this. All seemed to work exactly as needed. I do not request to keep the orientation therefore when I start the sequence and the meridian flip occurs, the rotator does NOT turn and all is well.
If however that exact same sequence is started when the object has already crossed the meridian, what had happened to me is that rotator starts turning which I did not want.
However I must admit, that I was learning things at that point and perhaps I had done something wrong. In my case I have just turned off rotator management and set it manually at the start of the night. Then it does not matter to me.
I might try again if it is confirmed that the rotator does not rotate when the sequence is started after the meridian.

You can read my answer to Yizhou above.

To be clear, in the following scenario:

In this situation, will Voyager rotate to:

Thanks for all the great work, just trying to be sure I understand things properly.